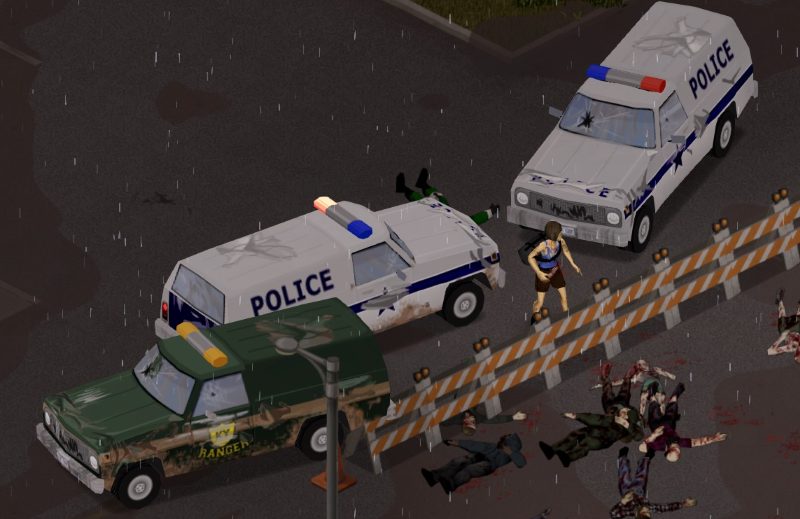 Hey, a fairly generalist dev blog this week – but hopefully enough to let you see which wheels are spinning. First off:

This was released on Tuesday and the changelist can be found here. Primary items of a relatively fixey, balancey, quality of lifey patch included:

We already have an initial internal test build of 41.38 with various fixes and polish, but nothing over sexy as yet: UI stuff, mod.pack loading issues, translation issues, incorrect anims playing and lua error fixing. We should also be having some polish of the cutaway system coming down the pipe from Fox on Team Tanglewood.

Next up this week we should be adding Rockstar Mark’s new car textures to it- these have been redone as Bitbaboon Steve noticed that are existing ones were a big cause of memory bloat. We’re hopeful that once implemented these will lead to a lot more people on low spec systems to run Build 41.The side bonus to this being that we can also have room to spare for blood overlays on said vehicles, which Mark has also done.

Work on 41 MP continues, but the work being done is slightly too complicated for a precis from this blog writer – but stuff like this is being proffered up from General Arcade’s Andrei in his updates:

“I’m working on detecting the right game variables and passing them to client to keep the context updated. I’m changing AnimState manually with the current zombie x/y/z coordinates during ZombiePacket processing – and though the animation states now sync, they are twitching as we expected – so my next step are some abstraction layers and appropriate helpers.”

We will endeavour to get a less technical rundown of affairs for you next week, as well as increasingly some visuals hopefully.

We’re trying to get everything finished and tidied up for when the wider team, and those playing the 41 beta, can get into the MP side of things – so Will, RJ and Xeonyx are currently working on the tutorial.

Until more tutorialised narrative content comes in later down the road, we’re sticking with the same basic model we have currently in Build 40 – but with a more interesting and enclosed map created by Xeonyx.

There’s also an extended sequence at the end that shows off the sneaking/sprinting that’s available now with the animations, a removal of as much of the existing one’s jank and clunk as we can, and some interesting stuff for people to find when exploring/running/surviving at the tutorial’s end.

(Not hugely exciting for the existing playerbase we know, but still something we need done and done well prior to 41’s full release)

Well, not quite finally – but what Thursdoid would be complete without a link to Yuri’s latest fire work? He’s been tuning the radius of light from the fire depending on the intensity of combustion, preventing crashes and added an alpha channel for effects so we can play with what is seen and what isn’t when the player is looking towards and looking away.

We’re also talking to Yuri about mixing his fire work in with the current implementation of item deletion – so that burnable items could be disposed with in fire barrels rather than the current rather gamey ‘delete y/n?’ approach we have with trash cans.

This bug cropped up this week, and we thought it was too fun not to share.

This week’s blockade from Nicholai SeveN. A general list of stuff added to PZ, and vids of features being worked on, is kept here – so you don’t have to plough through endless dev blogs for info. The Centralized Block of Italicised Text would like to direct your attention to the PZ Wiki should you feel like editing or amending something, and the PZ Mailing List that can send blogs like this and patch notes direct to your mailbox. We also live on Twitter right here! Our Discord is open for chat and hijinks too!