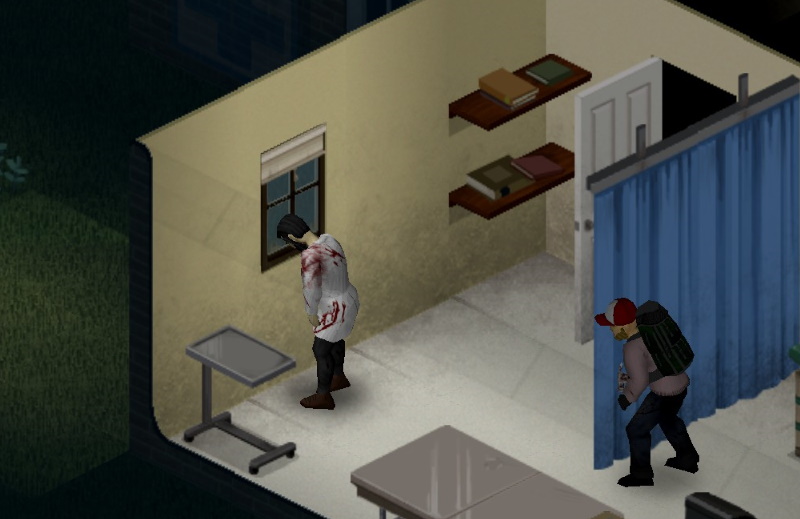 Hey all, a quick round the houses of things in the works at PZ HQ. This Monday we released IWBUMS beta version 41.30, while yesterday we hotfixed it with version 41.31 that fixed up the more egregious of its bugs.

There is still an issue (rooted, we think, at Steam’s end rather than our own) in which a minority of those running the beta with mods can’t launch the game. If this is you then a workaround can be found in this thread, while we will endeavour to have it patched in 41.32 ASAP.

We already have an internal test build for 41.32 up and running – and at the moment this also includes ropes that can be used as sheet ropes, caught fish of increased nutritional value, cutaway improvements and a variety of other improvements from the lovable bunch we know as Team Tanglewood. There’s also a load of fixes to the main map that have been added in after we received a quick kick up the bum on this subject from the chaps and ladies of the PZ reddit.

Given as we need to patch out the above Steam/mod issue this will released as soon as we can safely do so, and after another internal update of our build-making machine.

Some good progress on MP this week, with Mark’s network sync clock done and awaiting integration. This is one individual part in a wider process, but also a vital one. Longstanding doid-readers might recall our former MP experiments with Yuri establishing an overall MP loot syncing system, which we ultimately put on the shelf due to requirements elsewhere. So thankfully Mark has been able to bring this back and build on it within the codebase – saving some time in the progress.

This also gives Mark a point to inject stress test code (fake missed data, out of order data etc) for stress testing fake clients – so we can troubleshoot on non-populated servers. This will be one of Mark’s next tasks, and he told the blogger this week that “if you want a cool word to use then say that next we will be building the tools to ‘netstorm’ the server and clients so we can debug against real world worst case scenarios”. So there you go: we will be doing a ‘netstorm’.

This week’s sneaking past Dr Cortman from Max0Rda. A general list of stuff added to PZ, and vids of features being worked on, is kept here – so you don’t have to plough through endless dev blogs for info. The Centralized Block of Italicised Text would like to direct your attention to the PZ Wiki should you feel like editing or amending something, and the PZ Mailing List that can send blogs like this and patch notes direct to your mailbox. We also live on Twitter right here! Our Discord is open for chat and hijinks too!