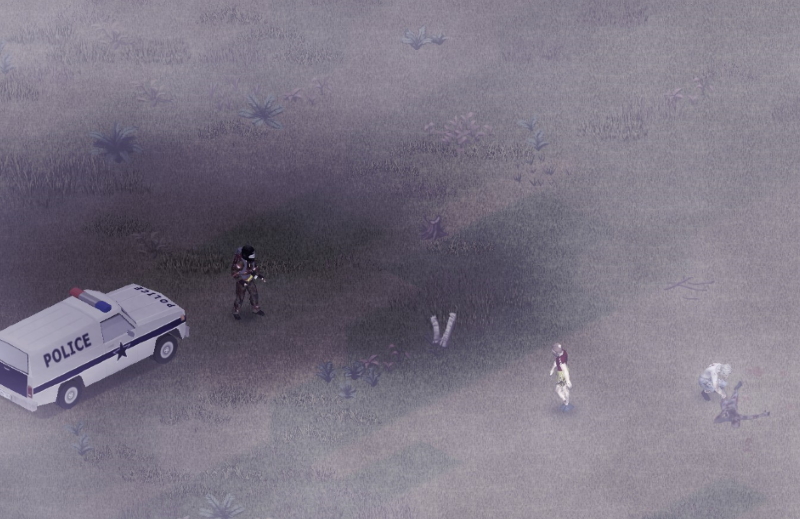 Hey all, here are a few updates from various members of the PZ team chipping away at the edifice of the zombie survival mountain.

We’ve got a patch for the Build 41 beta pretty much ready to go, just waiting on a few minor corrections before we put it out of the door. It’s more of a fix and balance affair rather than anything feature-packed but does contain a few nuggets of interest:

We’ve come a long way with Jamie Magnuson, one of the preeminent map creators in the PZ community, ever since he first blew everyone’s minds with New Denver.

More recently he’s been building one-off challenge maps for us, like the film set and the Kingsmouth holiday island in the build 41 beta, but we’re now pleased to be able to say that he’s now joining us full-time and will shortly be joining Binky and RingoD in the design and creation of our long-term Louisville project – which is our PZ rendition of an in-game city.

Xeonyx will initially be adding a lick of paint and required changes for our current tutorial map, given as a tutorial revamp is next on the cards for RJ to do, but then will be responsible for fleshing out downtown areas and picking up the gauntlet from where Mash left them off before she moved over to more general art duties.

Binky and RingoD are working on the suburbs areas meanwhile, and feel the occasion warrants a quick rare look into a gigantic game addition that’s still a few publicly released versions away at this point.

So, to give you a quick idea of the scale of the Louisville map – here’s a quick look at some streets in the urban residential outskirts, and a wider overview of where they fit on the overall (detail free, cos spoilers) wider city. Please note that this area will be *very* dense in terms of zombie population levels.

We always say this but, beyond even our most anticipated additions, Louisville is not something that will be appearing any time soon – but now with three people at the coalface we’ll hopefully be picking up some extra speed internally.

It’s another dry/techie MP update we’re afraid, but the mood is pretty positive between the MP Strike Team chaps who reckon what’s being done is being done well. Zac reports in with the below:

“This week has seen upgrades to the packet structure used to sync characters across the network. The IsoZombiePacket now includes the AnimState and ActionState names. In order to save bandwidth, it does not transmit the names as raw text. Instead, it uses indices into a table of names. Since state names are data-driven, there is no way to pre-generate these tables.”

“As such, a request-response method was implemented to construct the tables, and keep them in sync between server and clients. A new state can be loaded at any time. If a client encounters a new name, it sends a request to the server for a new id. The server generates it, adds the new entry to the table, and notifies all clients.”

“Up next, we are working on synchronising more and more game states. The idea is to steadily add to the feature set, then test and observe results, all the while using the fresh learnings to drive the design.”

Here’s Yuri’s latest fire video.  Here you can see WIP versions of molotov cocktails, generators and burning characters – on top of everything being shown using the hidden map of combustible materials to calculate fire spread and combustion.

(A few notes: we probably need to improve the way the fire looks on ‘more busy’ tiles like the long grass, maybe have a ‘wilted, browning long grass’ tile for them etc. Likewise all the effects visuals are a WIP, next up Yuri will be looking into fiery effects for faulty generators, metal objects in microwaves, burning zeds, fuel explosions etc.)

That’s about it – we’ve just taken delivery of Rockstar Mark’s new car textures that should fix 41’s memory bloat and get it running on some people’s rigs – as well as provide us with vehicular blood splats. So we’ll give that a tweet tomorrow so you can check it out if it works in-engine first time. Cheers all.

This week’s emergency call-out another image from $ℏìᶄ., can they make it to three in a row next week? A general list of stuff added to PZ, and vids of features being worked on, is kept here – so you don’t have to plough through endless dev blogs for info. The Centralized Block of Italicised Text would like to direct your attention to the PZ Wiki should you feel like editing or amending something, and the PZ Mailing List that can send blogs like this and patch notes direct to your mailbox. We also live on Twitter right here! Our Discord is open for chat and hijinks too!