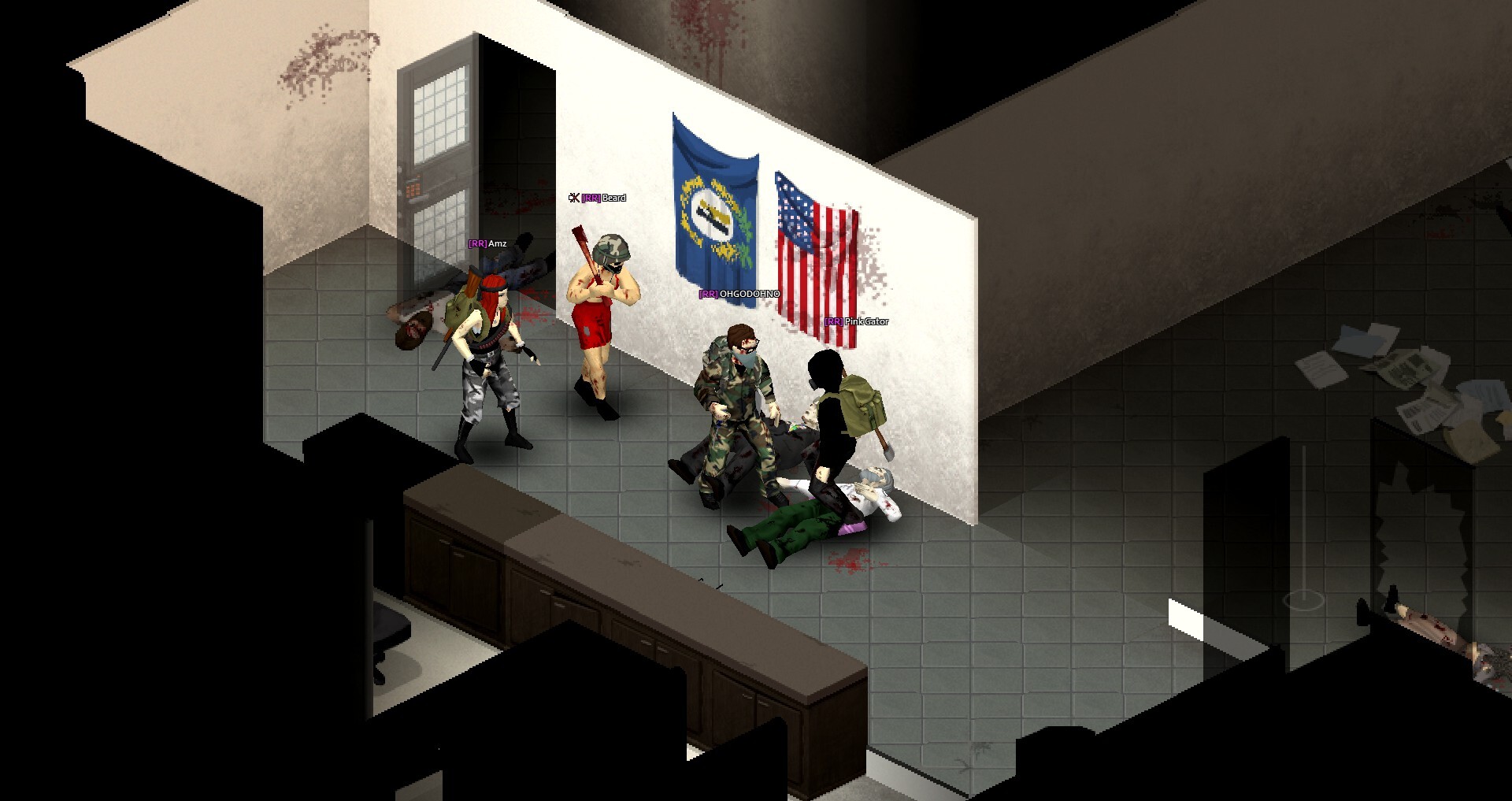 This week we have been playing the MP build extensively, to try and get a clearer and more solid idea how much work would be required to get it into a state we’d be comfortable releasing, and have increasingly become aware that it’s not good enough. We have been too optimistic, and for that we are extremely sorry.

Advances have been made, and the quality of where it is going is clear from our many tester testimonials and gameplay sessions, but since the (vital) transitions to zombies on the client it is not even close to the quality that the game or our players deserve, even for a beta. Furthermore, the deeper we’ve looked into it, the more systemic issues deep down have reared their heads. 2 players or 32 players, it doesn’t matter, the same issues get in the way of a positive and solid player experience.

It needs more time in the oven. We simply cannot release it half-baked. You don’t have to look far in gaming to see what can happen when you do.

We recognise that (especially in the past two weeks) we have been making cautiously optimistic noises – but put simply the more we played, the more we became aware of deep-rooted issues that it would be near-impossible to fix in a ‘live service’ situation.

Project Zomboid has every chance of being extremely popular when we release MP – it’s something that we’ve read from people everywhere, and increasingly something we’ve quietly believed ourselves. As we’ve said multiple times in the past, the multiplayer release of 41 is by far the most important build in Zomboid’s history, and if we don’t stick that landing it would be bad.

As it stands the MP build we’re playing internally isn’t robust enough to cope with potentially huge floodgates being opened upon it. Support requests, tech queries and bug reports would simply drown us – and the player and community experience would be poor in the absolute extreme.

We had a big meeting with General Arcade, and went through everything that could (and should) still be done to make PZ a MP game that could both stand the test of time, and a huge launch day. Something that would keep multiplayer servers populated and not result in disappointment for our community that have been so patient for so long.

This will likely be a much longer wait than we’ve been hoping, and particularly in light of the last two weeks of misguided hopefulness over improvements that while exciting, in the cold hard light of day still are far short of what we would dare release.

We have long shied away from giving any form of ETA, but in the interest of ensuring we are not stringing anyone along with vague notions of a timescale Thursdoid after Thursdoid, we have agreed with our MP team that anything up to six months should be the ballpark we’re now aiming for when it comes to getting a Build 41 MP release into player hands to a level of quality we’ll be confident it won’t blow up in everyone’s faces.

We know this will be of disappointment for many — and we’ll likely receive some flak for this decision — which is understandable, especially given the noises we’ve been making in the Thursdoids recently.

But we ask those that are upset by this news please to bear in mind other recent releases that people were begging for, and getting increasingly hyper-frustrated at the frequent delays — only to finally have it in their hands, as they facepalmed and asked themselves why the hell this wasn’t held back further??

That’s what we’re doing — because we’re lucky enough to be in a position we’re able to do that, both financially, as well as without marketing spends or boardroom pressure forcing our hand, and we are committed to the fact that while we feel the pressure from the community’s frustrations at the wait as well as our own desire for it to be ‘done’, we will not allow that to blind us to putting something out that will end badly for both us and our community that want to see the game grow. We may get a bloody nose for delaying it further and for this long, but we’ll take that gladly to ensure that doesn’t instead happen on release–as that’s a bloody nose we might not recover from.

This has been an immensely difficult week for us — people sometimes forget that we want this build out there too. It’s not just a game to us but our daily lives, and the march toward a multiplayer release — the moment we’ve desired to see for so long vanishing away months into the distance, and the prospect of continuing that climb for another six months is heartbreaking to us.

Nonetheless, it’s 100% the right call — we will not waver, and when all is said and done and multiplayer has been out for months and everyone is playing it, we promise everyone — ourselves and our community — will be glad we made this call, instead of releasing in a soon forgotten whimper.

We may take our time, but we get the job done in the end. Hopefully the almost unanimously positive reception to the long awaited animation update proved that to be the case. I honestly believe we wouldn’t be where we are today if we weren’t just as strict back then on what we put out, when everyone was chomping at the bit to play it, bugs and all, and couldn’t fathom why we were being so careful and protective for such a long time. Now people have had it for a long while, no one would want to go back in time and have us retroactively release the anim build 6 months earlier than we felt comfortable doing so, and risk it crashing like a lead balloon and damaging the game’s reputation and future. Our caution led to the most success Zomboid has ever enjoyed. We know the same will be true about multiplayer when people are finally playing it.

We’ve discussed with GA about getting two more internal QA engineers the MP team will have direct access to day to day while working, to allow them to more quickly diagnose and test stuff with more players outside our TIS internal tests.

They are also on the lookout for additional resources for the coding team to speed things up. Though it’s worth pointing out that this will require some significant time to learn the codebase and get up to speed for any new developer, which is why it was never a practical solution before our decision to commit to this longer delay with which to capitalize on another coder.

We hope with the changes we make, along with many organizational changes to improve our internal workflow with GA, we can deliver something sooner, and will of course continue looking for new avenues to speed things up — but for all intents and purposes we’re committing to this period of delay to make sure it is definitely achievable and no one should be under any illusions of expecting it sooner.

It’s not all bad news however. This longer and more defined schedule of getting MP up to scratch makes it clear that we can’t just continue this release drought in the meantime.

Therefore we are going to start releasing IWBUMs builds with new content in the interim, rather than holding back until the MP build is complete as was our original plan.

We will be removing MP elements from the current trunk code that would interfere with the single player game, and releasing a six month backlog of changes, fixes, optimization and upgrades waiting to go into the game. LWJGL 3 and java 15 upgrades in particular that will improve performance and compatibility, not least a new fancy garbage collector we’ve never had the opportunity to use before that should all but eliminate any periodic pauses that have plagued our game in the past.

After this, we will be starting to release additional content builds to tide the community over in the wait. We have to be somewhat careful on the style of content we add, so as to not make the MP work more complicated and hold it back further, but stuff you should be able to look forward to in the coming months include:

Speaking of Thursdoids, a primary piece of feedback we’ve had from the MP team has been the detrimental effect that the weekly cycle of blog updates on MP progress has had on the development process.

A weekly development sprint, where results are desired to show off or talk about makes it much harder to work on longer term improvements. To be honest this is not the first time this has been brought up or felt by the TIS team, the weekly blogs have always stacked a lot of pressure on our shoulders, only ever being 7 days away. But we are both immensely proud of our weekly blogs, and have found them to be a huge part of keeping our community content and informed. Truth be told, we have also been somewhat nervous that reducing their frequency suddenly may be perceived by our community as some kind of winding down, rather than something that would improve development in any way, and so have long been resistant to change.

However, in the interest of aiding the MP team in having the time to do longer and less interrupted work on features without the pressure to provide small incremental improvements that clearly haven’t been enough to make the leaps to release that are needed–we are going to make the following changes to how we release Thursdoids over the coming six month period.

We’ll see how these Thursdoids go down over the coming months, and will decide based on that what to do once multiplayer releases whether to go back to weekly Thursdoids or to carry on with bi-weekly.

Thanks for reading, and apologies again for the major misstep in our recent enthusiasm. While we did state it was ‘cautious optimism’, we regret letting short term improvements and perhaps a bit of wishful thinking colour our blog updates. Sometimes you just get lost in the weeds and an uptick one week is deceptive to how much work really remains. We hope the firmer date will give solace to those who check week after week to frustration, who are largely only interested in multiplayer, that they can safely put our game aside for a while, and when to start looking again. And to everyone else, we hope getting fresh content again will help the time pass that little bit quicker.