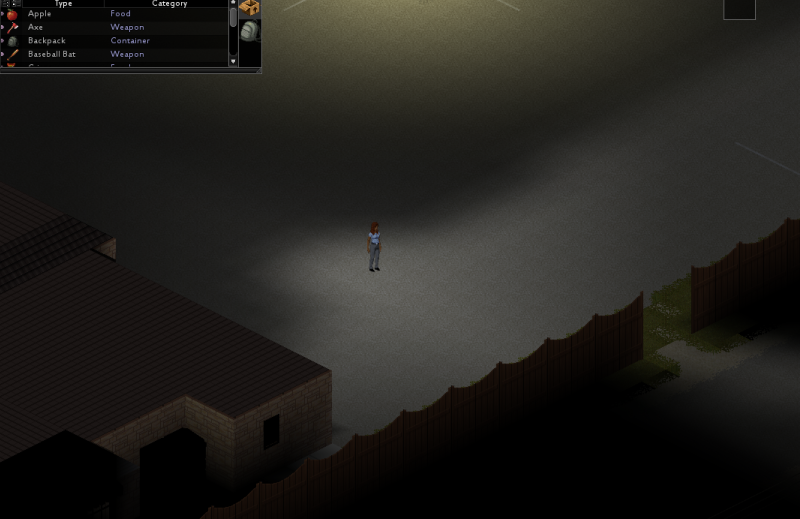 Once again we have a week where the coders are buckling down getting all the features of the game working in preparation for a closed test of the game (without meta-game). As such we’re getting to the point now where it’s increasingly difficult to show ‘new stuff’, and until we get to finishing the meta-game that’s unlikely to change much. Though there may be little prezzies from Binky, Mash and Romain in the meantime.

So for a while, a big part of Mondoids will be more about what’s working again, what areas we’re getting close to finished in, moreso than what is new, just to give everyone an insight into what’s left to do. We will try and be as thorough as possible to give people plenty and hopefully it’ll be interesting and/or satisfy on some level. There is some new stuff to report too, however. A few highlights from this week include:

Since streaming was implemented, as well as the new map and a necessary tileset reorganization when going to the new map, the lighting system was completely kaput and needed redeveloping to fit the new map format. Such was the intense effort to get the meta-game complete, this got put to the side for a long time, though had remained a niggling worry at how it would be implementable without costing a ton of CPU. This was not only losing the gameplay associated with lighting, but meaning despite the awesome new map, videos and screenshots have all been rather less pretty than they should and we could certainly never release with the lighting broken in the game.

Finally we have our beloved lighting system back, this time improved to get rid of any glitches (including that infernal flicker effect plaguing the 0.2.0 builds) and improving the ‘fog of war’ effect inside buildings you’ve not been in . A nice addition to this is that now the distance you (and anyone else) is stood from a window, along with the light difference between you and what lies through the window, will stop visibility through, which not only means that running past buildings will often not reveal anything of the interior, but buildings with lights on will be lit up like a Christmas tree. While zombies already take light into consideration in the chance of spotting you, this will further magnify this effect, meaning lights on at night without barricaded windows is potentially very deadly, where wandering out with them off will be more or less safe (noise aside).

Again, due to the streaming support, we had to rethink how buildings were defined since it was entirely possible for half a building to exist, sliced down the middle at the edge of the loaded area. This information is doubly important for the meta-game, since buildings way out of the spawn distance need to be in the game for the meta-game to work. Also, this is vital for making lightswitches work by calculating where the bulb should be What was once an automatic (but slow) process on game load, we’ve now had to move this to the map data to be loaded independently of the map.

EasyPickins has done wonderful work on the tools to deal with this for all future buildings made, but this has however meant any of the new map that was created before the tools were developed will need room definitions put into the map manually. This process is underway (and was done to a limited amount for meta-game development) but for looting, meta-game, indoor lighting etc to be completely working across the entire map this is a slow, rather mind-numbing task (sorry map modders! 🙁 ). One thing this has made us realize is there’s a lot of flipping buildings!

One of the most requested things to add was something taken out of 0.2.0 because of a limitation with the new lighting system. Double size mode is back!

It may have a few limitations though. Due to the way the lighting system works, there are potential issues with the high graphics settings on lower end machines using double sizing, as graphics cards will need to support ‘depth buffers’ on the offscreen bitmap that’s used to upscale the graphics. That’s technical jargon that means ‘might bugger up on low end cards trying to do high graphics mode and double size’, though it’s unclear how many low end cards that would have this issue would be capable of high graphics settings anyway. In fact this is a similar reason on 0.1.5d sometime cards struggle with the double size mode and bomb out when it’s clicked, and all solutions we’ve had to this are rather graphic card dependent sadly.

It should be perfectly fine to do low graphics mode with double size on any card that supported it in 0.1.5d at least, and we’ll try and make it as compatible as possible.

We now have an idle animation! Hurrah! Zombies without any stimulus will generally just stand around, though there will always be the odd wanderer or ten. This makes the zombies much more authentic feeling. It was RingoD that first noticed (within the team, at least) that in previous versions you never ever came across a group of zombies just idling around, and how odd an omission this was for zombie fiction.

Furthermore, sometimes hordes of zombies will generally be stood around facing the same direction, the direction of the last thing that distracted them. Especially with the new strafing / sneaking mechanics, means stealthing it past a bunch of zombies is now a feasible (in fact very very much recommended) tactic. All it takes is one zombie to spot you, however, as their agitated noises will alert nearby zombies and start bringing more and more toward you. This results in the more natural staggered effect of more and more zombies peeling off a horde as they are alerted.

Done but not implemented yet are anims for zombies turning to spot you, which will hopefully make for even more tension and creepiness when trying to sneak past a massive horde and one’s head starts to turn and oh no!

We’ve also done major rebalancing to the zombie’s default senses, memory etc though this is still WIP and will likely go on until release. Our hope is this will make stealth much more important to the game.

Since an offscreen bitmap support is required for the double-size feature above, and because there is already a backlog of animations to get in, and because Binky was probably getting bleary eyed looking at Bob in his underpants day in day out, Binky has been doing some shader programming for the high quality settings, meaning he can add saturation effects to let the sun radiantly shine and at nighttime bleach the colour out of the world and blue tint in a much more effective way. Even a bit of dawn and dusk tinting!

The hope is that it will make RC3 much more atmospheric on higher settings, as well as hopefully help us catch more eyes looking for pretty things when we’re sat on a certain store! The potential to expand this in future would open up a lot of opportunities for screen effects to improve the look of the game or give feedback to the player.

Again, we’d like to stress that any additional things like this are not impacting the release date at all and are worked on concurrently to getting the game ready, and are ways to try and maximize the quality and people’s enjoyment of the game for release (and make further amends for its delay ;)) while vital tasks are completed. We would cut any such extra feature should the other work be completed, or switch back onto vital things as they crop up.

So here is a video showing a bit off one of the map cells, which also shows off the new zombie behaviour / sight, shaders and of course remind us all what a legend Zach Beever is. Please consider everything WIP, particularly that all light sources have not yet been placed so a lot of the map is still pretty damn dark.

(Please note the version of the game this is running on doesn’t have some of Romain’s latest work in, as well as some flirtation with the old inventory system at one point after accidentally shutting the new one down.)

Yep, you can now edit the keys in the options panel! Yippee! Finally you can select any key combination you want, just like in a proper game!

This is stage one of a bigger overhaul that will be happening post RC3 where we plan to add macroable ‘actions’ that can either be dragged onto hotbars or associated with a key on the keyboard. In the meantime though this will hopefully make a lot of people’s lives easier.

Uncategorized | 04 June 2013
Project Zomboid | Copyright © The Indie Stone 2023. All Rights Reserved.
Site by Redwire
Stable Build: 41.78.16 | IWBUMS Beta: 41.78.16 | Version history | Wiki
Follow us
Manage Cookie Consent
To provide the best experience, we use technologies like cookies to store and/or access device information. Consenting to these technologies will allow us to process data such as browsing behaviour or unique IDs on this site. Not consenting or withdrawing consent, may adversely affect certain features and functions.
Manage options Manage services Manage vendors Read more about these purposes
View preferences
{title} {title} {title}