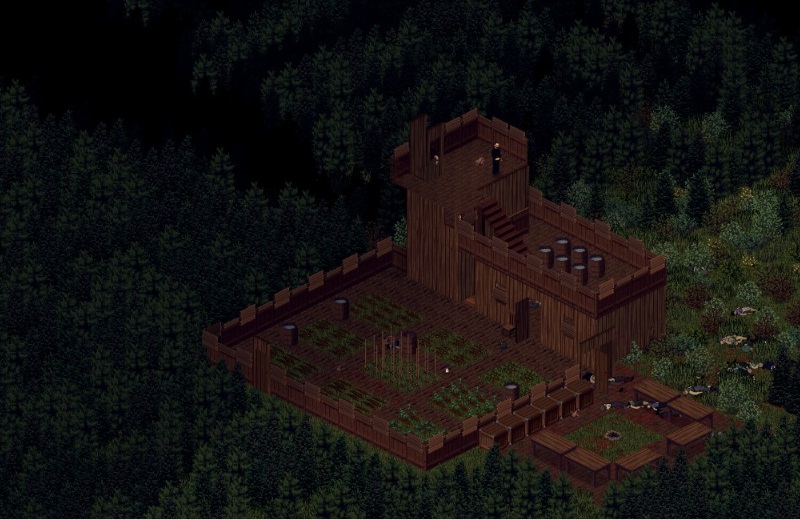 Good Mondoid to one and all. Here’s all the latest on the comings and goings in West Point and in Muldraugh…

A giganto-fix update to Build 33 full of RJ and EP tweaks and corrections has just been released on the IWBUMS public test beta channel. If you want to join in the fun then you can find IWBUMS details here, and you can submit bug reports via the bug tracker on our forums.

The 33.7 patch, fix and polish overview can be found here but the highlights are performance improvements, FMOD sounds balance, crash fixes, bizarro building randomization nerfing, ambient birdsong at correct times of day, Linux build corrections and the re-addition of Zach Beever’s amazing new menu music. Those ‘surprise!’ silent burglar alarms should be a thing of the past too.

“Myself and Tim have been fixing like crazy lately getting stuff up to a release quality” explained RJ just now, when pressured for comment over Skype. “33.7 should see a fix for some of the performance issues and the crackling sounds that testers have been reporting. Then there’s also a load more sound balance, the remastered menu music is back and we’ve also made a big dent on bug reports in the tracker!”

Meanwhile Turbo, the final of the three 33 code plotters, has a raft of his own fixes and tweaks that will most likely be appearing in a 33.8 later in the week. This will cover translations, controller support for the new movables and radio systems, split-screen play fixes and ways to improve legibility in general broadcasts and split-screen chat.

At the moment we’re continuing to work toward getting Creative into build 33 and still have a few more bits and bobs to do on it. There is, however, a noticeable complication that could have an impact on exactly when we release it.

The complication, which is a pleasant one in the scheme of things, is that once Creative is released and people are building their schools, offices and hometowns – they’ll want and expect their creations to survive in all future builds.

There is, however, an impending development we’re making which will make a pretty huge visual change to the game – something we’ve mentioned before in Mondoids as ‘Mash’s Secret Mission’.

When it emerges there will be a dilemma, as a part of it has involved a lot of organizational changes which will likely result in save incompatibilities. If it’s necessary then we’ll provide the previous build for legacy saves, but that won’t help in Creative Mode where people who’ve been conducting huge building projects could suddenly find their architectural prowess nuked from orbit.

So this leaves us in a tricky position: release Creative into the current Build 33 with peoples’ buildings under threat in the near future, or introduce Creative Mode simultaneously with Mash’s Secret Mission in a reframed Build 34? Increasingly we’re leaning towards the latter option, which (hopefully) would go into public testing once final hurdles have been vaulted – and not long after the existing Build 33 goes fully live. This testing may be in the form of an official 34 IWBUMS, or it could potentially have its own branch as our early MP builds did.

[On top of this there’s also the consideration that the more stable Build 33’s TV/Radio/FMod/etc become, the closer to public release it feels – and it feels counterintuitive to suddenly pile in a shedload of new Creative bugs.]

In short then, whichever way it happens, Creative will be coming as soon as it’s ready AND player creations can last for years. If it so happens that everything that’s currently in Build 33 is stable and ready for wider public consumption then there’s no point in keeping it in IWBUMS, and then (given that it’s predominantly separate members of the team working on it) we can get this reframed Build 34 into public testing fairly soon afterwards.

Given the long wait for the Build 33 IWBUMS this probably wouldn’t be a bad thing and, even though we’d be slotting an extra build in beforehand, it shouldn’t really get too much in the way of the animation/combat update that would now come in 35. What with Creative, the Secret Mission, General Arcade’s MP improvements, the new Animation system and everything beyond all lining up it should make for some exciting times as we move into next year.

This week’s featured image from Sonicus over on Steam. The Centralised Block of Italicised text, would like to direct your attention to the PZ Wiki should you feel like editing or amending something, and the PZ Mailing List that can send blogs like this and patch notes direct to your mailbox.