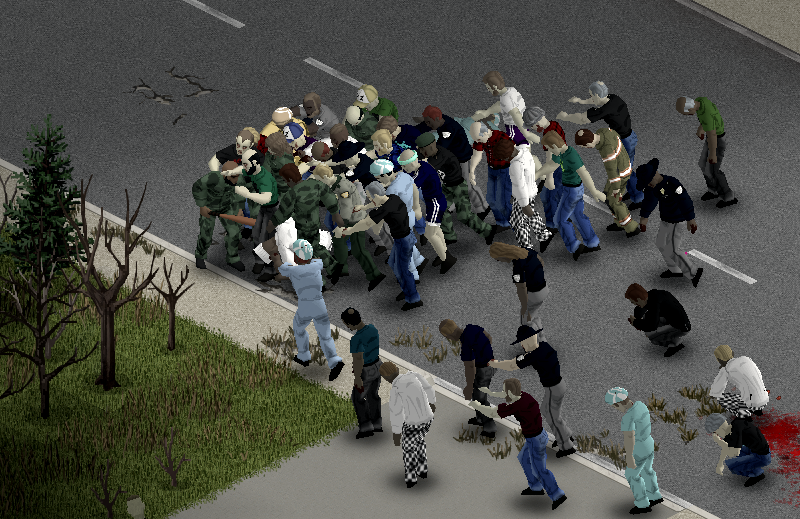 A nice treat for us all this Mondoid. An update on the new animation system, along with a video that we feel really underlines just how much of an impact it will all have on PZ once it goes live. Alongside the fruits of The Secret Mission it’s a great thing to see in motion!

First the video, then a few explanations…

Background work featuring Martin the animator man has been ongoing for a while now, and we now have a huge library of animations for players and zombies that we’re in the process of implementing. We’ve got everything in the can from core stuff like combat and character movement, all the way to vomiting, rubbing painful body parts and swigging from bottles.

In the recent implementation work one aspect we got working far better than expected were ‘masked animations’ and more specifically ‘upper body only’ ones. This means that we can play animations on the player’s top half (and that of the zombies) without interrupting what their feet are doing. This is proving useful for zombie attacks and player emotes – seeing them work on characters who are standing, walking, sneaking or shambling.

Some things to note about the video:

The new animation system has come on a long way, and we now have what feels close to a working system. There is, however, still some work required before it could be put into internal testing. It’s not clear if this will make it into the Build 34 IWBUMS public test or not, and similarly not clear if Animation or Creative will be first out of the gate. It largely depends on how both of these go, what unforeseen problems we may hit, and which passes the finishing line first.

We hope you agree that it’ll be awesome when it arrives though! It’s fantastic to have the animation system at the stage it’s at so that we can show off all Martin’s amazing work who, like Mash with the Secret Mission, has been working out of the spotlight for so long.

Oh and the ‘easy set-up’ co-op is in testing. There are still a few UI things to sort out, as well as a few bugs that have cropped up, but it’s edging closer.