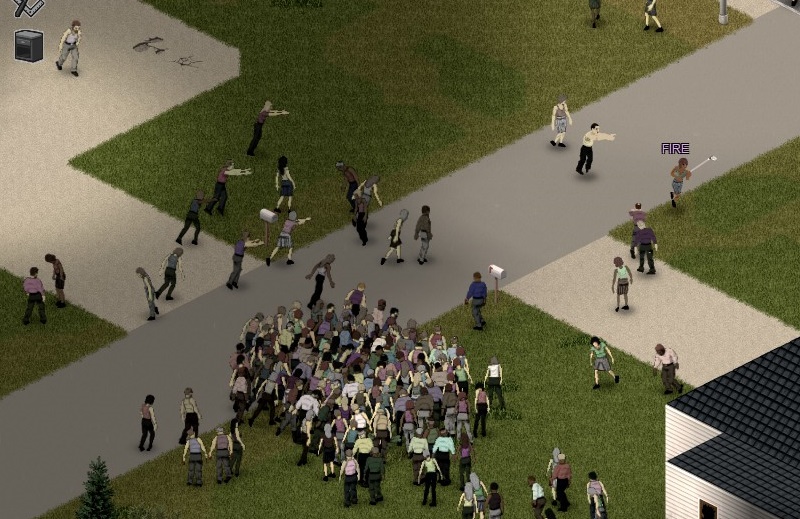 With Martin the animator’s great big anims export ongoing (the one necessitated by an update to the way the visible backpacks, blood overlays and layered clothing are going to work) we haven’t got a great big exciting new vid for you this Mondoid, but perhaps we can extrapolate a little deeper from what we’ve already put on show. Namely, the introduction of different sorts of zeds.

Zeds who were once people who collapsed while at work, and rose again wearing their uniform, carrying their work tools and can (most likely) be found shambling near to their place of employment. We introduced survivor corpses, ‘occupation’ homes, pre-barricaded homes and the like back in Build 33 – and having this sort of variation in zombies will let us double-down on this.

[Please note we’ll be adding a lot of dirt and blood splatter to clothing. These are WIP images.]

‘Career’ zombies will not be common, but if you spot a policeman zombie in the horde then you’ll know there’s a high chance he’ll be carrying a police radio and a firearm. If you head into a restaurant and notice a chef zed in the kitchen then it could well be carrying a high quality knife. Likewise, workmen zombies at in the McCoy logging will carry a high chance of having decent tools and axes in their inventories. The hope is that you’ll feel an element of risk and reward when you spot a Career Zed in a huge crowd, and weigh up the pros and cons of trying to separate it and take it down.

It’s still unknown just how much of Martin’s work will be going into the first animation build, we’re not sure whether backpacks-on-zombies will be in there for example. As we go along, however, then zombies with severed limbs will clearly have less chance of scratching you. In terms of firemen zeds, meanwhile, we can populate areas around burnt out buildings with them – to suggest that they were called out to the fire during the opening days of the outbreak when the occupants had been laid low with sickness.

And, of course, if you so choose these are all clothes you can strip from the bodies of the deceased and wear yourself. The impact the new system will have on RP servers online will, hopefully, be quite profound. Likewise, that feeling of excitement you feel when you’re playing online or off, and you see the zombie of a recently turned survivor. For the first time, we’re hoping, that the horde will be able to give you an enticing risk/reward amidst all the sneaking around.

More next week, but before you go (and because it’s always nice to have moving images) here’s a quick video to show the new trees that are going into forests. It’s mainly a visual thing, sure, but we hope you agree that it’ll be a cool addition for those who favour wilderness survival. [Please note we’ll likely play around with line of sight a bit more than what’s shown in the video]

This week’s featured image from FIRE over on Steam.  The Centralized Block of Italicised Text would like to direct your attention to the PZ Wiki should you feel like editing or amending something, and the PZ Mailing List that can send blogs like this and patch notes direct to your mailbox. We also live on Twitter right here! Okay thanks bye!