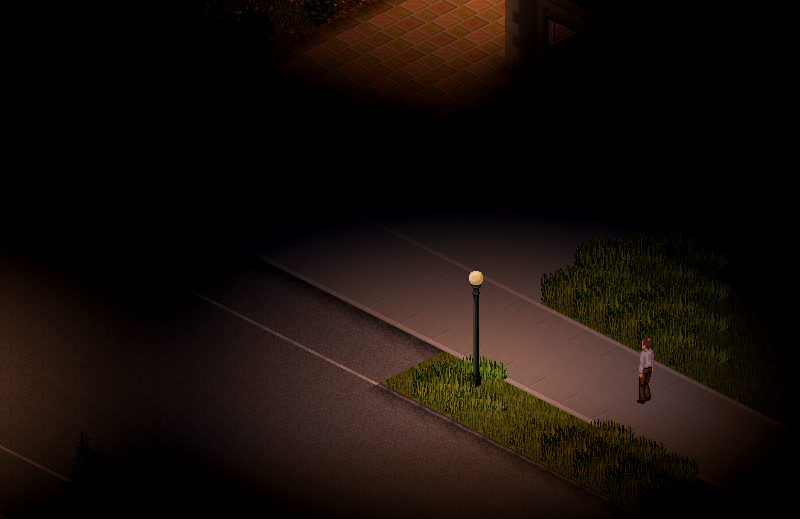 Happy New Year to all survivors everywhere, no matter what your current moodle is. With the dawn of 2012 comes a moment for a bit of a PZ ‘State of the Nation’ address, so everyone knows what’s going down in Knox County in the months ahead. The main news, of course, is about the update: it’s progressing really well, and we’re firmly on the final stretch now. We’re not willing to give a release date, as always, but we think that your patience will be rewarded.

In the run-up to Christmas our blogs largely focussed on the NPC activities being pumped into the game, but seeing as the game has received a radical engine overhaul since the last build there’s also a bunch of exciting technical features being introduced.

We’re only formally announcing the stuff we can 100% be sure will be complete by the time that the new NPC behaviours are solid enough to release, but one thing that’s a dead cert is a new graphics and lighting engine. This not only improves the graphics of the game dramatically (though the traditional X-Com style tiled lighting will still be available for lower spec machines or retro enthusiasts) but has some fun gameplay ramifications. Here is a quick video to demo it:

The new lighting has a big effect on the game visually, but it also affects gameplay.

Primarily it’s allowed us to reduce the ambient light at night – we’ve added light sources like streetlamps, but find yourself in an unlit alleyway or in the woods and you’ll be in trouble. Unless armed with a flashlight, survivors will need to stick to lit areas to have any hope of seeing where they are going. As such flashlights and batteries will now be prized commodities, especially when we flick off the switch at the local power plant! Weather and moon cycles will further affect light levels: a full moon and clear sky resulting in lighter nights and longer viewing distances.

Spending lots of time awake in darkness will tend to depress characters, yet turning on the lights will be dangerous – as zombies will be attracted to the light and even see movement through curtains or sheets. It’ll only be truly safe to light up rooms when they’ve been barricaded. Candles and other non-electrical light sources are also planned.

Another primary feature is likely to be complete by the time the build is released as well, but we’d rather it be a surprise. It stems from the fact that we’ve managed to reduce the memory usage of the 0.1.5 build dramatically – it now uses a quarter of its original memory footprint. As such we have a load more memory to spend – and the modders among you might have an inkling as to where we’ll direct it… in fact people with the eagle-eyed trait may be able to spot a hint of it in the video…

And after the update? It should also be underlined that one of the most frequently called for features in PZ – that of saving and map traversal – will be of primary development importance once the current build is kicked out of Indie Stone towers and into your tender, loving embrace. We’ve been laying the foundations for it in this update, but seeing as we’ve already coded it once we know that it’s one of the most long-winded, repetitive and frustrating development tasks on the menu.

Seeing as it’ll take a while to code, then, we’ll be keeping the momentum going with interim updates while saving is still in development. As you may already know female characters, clothes and animations are getting close, for example, and from this extra content from the Kate and Baldspot adventure (with a healed, walking Kate) can follow. The Will Porter, meanwhile, has started writing new NPC archetype dialogue for more specific character types to dripfeed into updates – so the scripts can stay a little more fresh after repeated plays.

All of this is essentially meant to say that 2012 is setting itself up to be a good year for having your brain eaten. We realise that getting this update out has been a slow old business, even when taking the ‘incident’ into account, but want to underline that with this update we’ll be laying down the groundwork to help future updates flow thicker and faster. There’s a lot bubbling under the surface of PZ development and we can’t wait to let you die horribly within it.