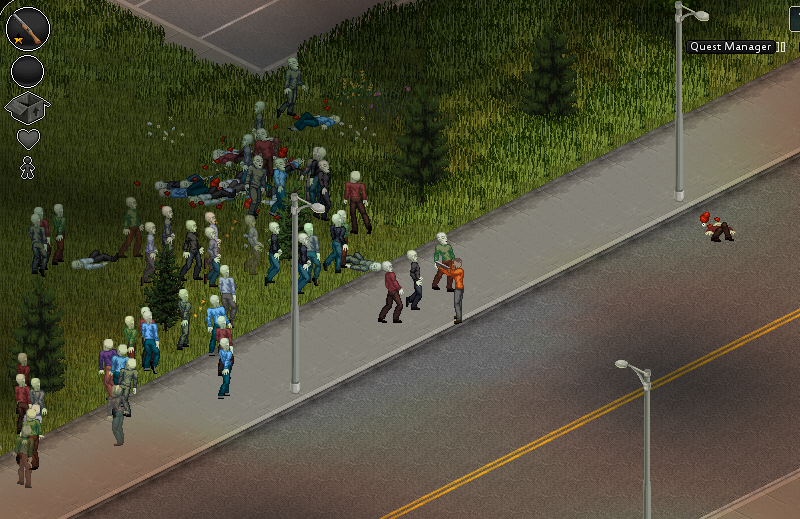 With the task countdown now at three, we thought we’d give you a brief run-down on what we’re up to at PZ Towers. Currently on Lemmy’s agenda is to fix a few bugs that have cropped up through recent task completions (there’s one to do with breakable windows, for instance, and another with grumpy furniture that refuses to budge despite the best efforts of the zombies), but we’re almost there. The remaining tasks aren’t minor ones, but blue sky is visible. Lemmy hasn’t seen daylight in weeks, and won’t until we’ve kicked this thing out of the door…

Annoyingly, something else that’s cropped up is a nasty lighting bug that means any videos we take will look horrid – meaning that we wouldn’t really want them propagated to a mass audience on YouTube. In the absence of a play-through vid, then, we thought we’d share some good news that we were saving for after the update.

In short, the PZ team is going to expand a little. Famed Zomboid mod hero Ringod (aka Paul Ring) is going to helm the scripting part of PZ Stories – working alongside The Will Porter to further the adventures of Baldspot and Kate, and indeed the raft of new characters who will follow them. Lemmy, meanwhile, will be able to concentrate on engine and gameplay development – and of course that all-important save system.

Paul lives and works in Newcastle, and is an entirely spiffo sort of guy – you might know him from his excellent PZ modding videos on YouTube. We’re really excited to officially welcome him to the development team, and not just because of his charming regional accent. His impending work means that we’ll be able to punt story and dialogue updates out far quicker than we would have done had Lemmy been their sole custodian.

We’ll likely have further staff announcements to make after the update has been released, as well as our plans for a PZ meet-up in Newcastle, but until then we can’t afford to remove our nose from the grindstone.

To celebrate and alleviate the wait-pain, please take this picture of a sign of Spiffo the Raccoon (mascot of independent Knox County fast food chain Spiffo’s and star of PAWS, the cancelled Indie Stone platformer) with our love.

Oh, and here’s a few screenshots showing a couple of the new weapons/recipes going into the update. Here we have survivors waving knives, using a saw on a shotgun to create a sawn-off (or ‘sawed-off’ as they’d say in Muldraugh), and said weapon being used to dead some zeds. Thanks everyone!