On the reanimated dead... 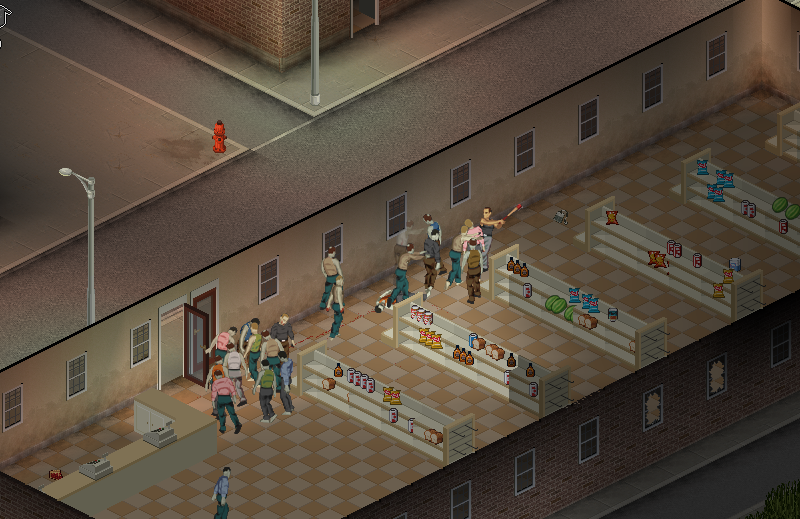 Ladies and Gentlemen, boys and girls, The Indie Stone are proud to introduce you to our new animation system – which will be a part of the coming update, and indeed the increasingly imminent public test build R.

This was first created during the Easter break, which we decided to use as something of a left-field design brainstorm session. Our use of hand-drawn sprites was starting to be of real concern – the process was becoming unmanageable due to the sheer number of frames, clothing pieces and directions required. We were generally having to shy away from necessary animations, or resorting to ones with a mere one or two frames.

As such we’ve built a new system that uses pre-rendered 3D models that are consequently rendered into sprites. On top of that we then use various techniques to increase clarity when they’re shrunk down so we can emulate the old graphical style as much as possible alongside the crisper animations.

We recognise that some people may miss the retro-look graphics, along with the baldy alien zomboids, but unfortunately the move away from individually hand-drawn sprites was fundamentally necessary for the development of the game. Sprite and animation creation now, genuinely, takes a hundredth of the amount of time it did previously.

What’s more many, many extra features are now on the table for future updates – without us having to scale the terrifying heights of Mt. Animation. Yanking an axe from a zombie’s ribcage, decapitations, zombies with busted legs dragging themselves towards you… it’s all possible now, and it won’t be making any significant extra demands on your system either. We hope you agree the possibilities are exciting.

With all this in mind, please check out our demonstration vid. Please note that everything you see is still WIP, contents may settle during transit, this is only our first step towards a more animated world and please keep arms and legs inside the carriage at ALL times.

All this leads us to the inevitable ‘how long till the update plz’ paragraph. As you might be aware, we’re currently running public tests of our update builds on our forum. These are versions that come with their fair share of bugs and launch issues that survivors who don’t mind a rough-ish ride can take for a spin. The next build, R, should (fingers crossed) be released in around two days time – Lemmy is currently fixing the wheelie bin issue and a few save bugs that have cropped up with the changes. The new animation system will be present in the R build, as well as a tweaked approach to combat.

We don’t anticipate that the launch of the official update on our site and Desura will be long after this – although, as ever, unexpected bugs could still rear their heads. We’ll blog again when we have fresh news. Until then Knox County!

On optimization and time…

Uncategorized | 02 August 2012
Project Zomboid | Copyright © The Indie Stone 2023. All Rights Reserved.
Site by Redwire
Stable Build: 41.78.16 | IWBUMS Beta: 41.78.16 | Version history | Wiki
Follow us
Manage Cookie Consent
To provide the best experience, we use technologies like cookies to store and/or access device information. Consenting to these technologies will allow us to process data such as browsing behaviour or unique IDs on this site. Not consenting or withdrawing consent, may adversely affect certain features and functions.
Manage options Manage services Manage vendors Read more about these purposes
View preferences
{title} {title} {title}