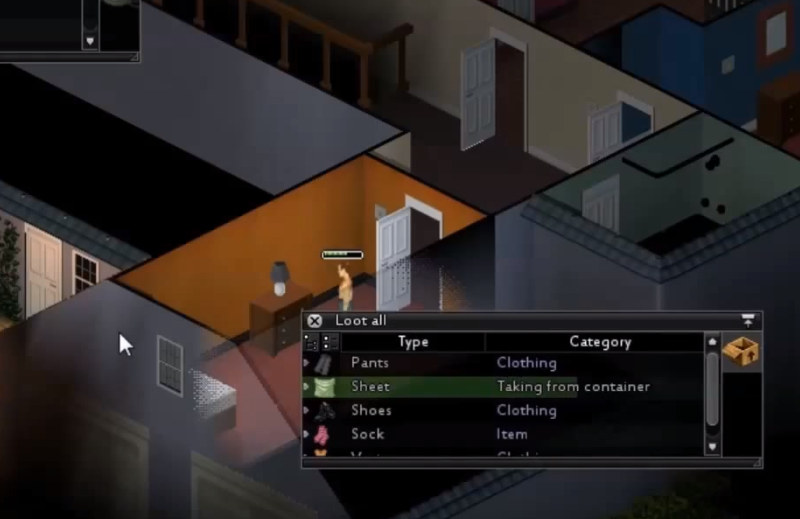 Hey there survivor. You look under strain. Is carrying around piles of foraged wood, beta- blockers and shotguns getting you down? Does that creaky old UI keep getting in the way?

Well, we here at The Indie Stone feel your pain. This is why (in the background to the good progress being made on fixing fire for the release of the confusingly monikered Public Test Build 0.2.0r RC2.6) we’ve been working on a new LUA-based UI and inventory system. Put simply, we’ve outgrown the old trappings of PZ user ‘friendliness’ want to put and ends to your fights with the interface all in the name of ‘Operation Greenlight’.

You can read up on Chris discussing this over with our friends at the spiffing PCGamingN, but here’s the top-line. Our new inventory system will be integrated into public test builds after the official release of our 0.2.1 build. It’s being built around the concept of bags.

There will be a much more stringent carry limit, meaning that the player will no longer be able to carry a massive selection of items around with them – unless they’ve found a portable container to store them in. Whether it’s a plastic bag or a backpack, it’ll show up as a new tab on the inventory panel – and let you swap items between them. Some bags will provide bonuses for a certain weight of items, others might have specific bonuses depending on what sort of gear you wedge inside it.

On top of this, all inventory manipulation will become timed. Gone will be instantaneous picking up, eating or any other use and abuse of inventory items. How long an item takes to pick up or use will depend on what sort of bag you’re using, how full it is and the size of the item – and as such will add a new level of thought and strategy when looting buildings. Do you fill your bags and risk being caught out, or will you travel light? Should you find yourself in trouble, however, you’ll still be able to drop the bag instantly – shedding weight, getting yourself clear and hopefully returning for your lost gear later on.

A sneak peek of the new inventory system. (WIP!) (Subject to change!)

Overall, then, manual hunting through your inventory will be replaced by character-based timed actions – letting us tie the ability to skills, and also to help us make the interface as convenient as possible for you to use. We’ll add filters to allow you to show only certain subsets of items, for example, you’ll be able to sort by weight or by name – and even type into a search box to find all items with, say, ‘soup’ in their name. You’ve got to get that Tasty Soup fix, right?

Multiple panels will be available to help you customise your survival loot perusal – each opening when you hover your cursor above it. One could be for all the weapons in your backpack, another for all the food, and another for a detailed list for the more in-depth backpack manipulation. This means people running higher resolutions can use that extra screen space to its fullest.

Since we will be completely replacing all the interfaces in the game, this means that crafting will be getting a makeover too. Internally known as ‘Zomboid Surface’, a joke that only half the team understand, this will mean that you’ll no longer be able to create a barricade while you’re standing in the middle of the street. You’ll have to find an appropriate surface to carry
out your crafting – a worktop or a table.

Every surface will have an inventory panel, much like containers or your own inventory. In addition to this, however, there’ll be an extra side panel showing all recipes you have learned, a space for ingredients, a space for tools and a final slot for your creation itself. Instead of the simple ‘X in, Y out’ system we’ll be able to expand PZ crafting to better leverage skills and recipes.

If you’re creating a wall section then with no skills and just a hammer, nails and planks you will likely end up with a rickety piece of crap that a zombie could knock down with a thirty seconds of headbutts. Add in additional ingredients (wood glue or metal plates), an extra tool (a sand planer) and some extra woodwork skill points? You’ve got yourself something solid.

Finally, recipes will be learned from books (another timed action) which will give you added impetus to stave off boredom – and give a bonus to the quality of the items you create after you’ve perused them.

Those are the plans, then, but clearly our current priority is to get the next R build out of the door. As mentioned, we’re going great guns with the tricky issue of reintroducing fire – and seeing as that’s linked to the rain bug we should get some Knox County storms back soon after its fixed. Our beloved Caspian Prince meanwhile, Java expert and oftentime Indie Stone saviour, is looking into the music loop and garbage collection stutter issues.

Thanks all. Sleep safe. Barricade that door.

In other news Chris has a new puppy! High times indeed at The Indie Stone…

On the reanimated dead…

All the Zomboid Ladies!