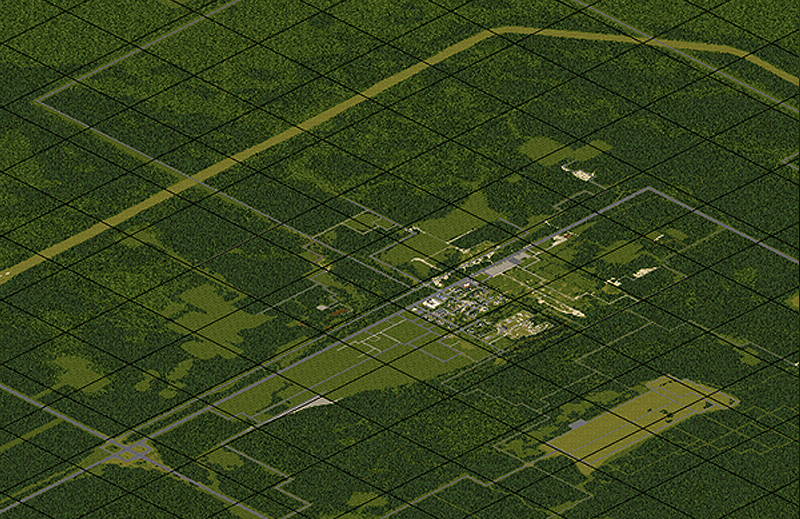 Evening all. Another hectic week at the Zomboid Ranch – albeit one that was spent largely working on stuff we told you about last week. Binky has been obsessed with what he calls ‘enshrinkulation’ – the process by which sprites are crisply represented in the Zomboid engine. You can read into the process over on his blog.

Chris, meanwhile, has been continuing his work on NPC behaviours in the up-close and meta-game. Will has been scribbling their dialogue. Then, Romain has been doing final farming tests and Mash has been continuing work on the new maps – with locations that look a bit like this.

We’ll do those promised vids as soon as the fruits of Binky’s enshrinkulation are in the game. Until then, though, we thought it might be an idea to have a chat with your good selves about the map proper. The uber-map that covers our chosen slice of Kentucky.

In this bright new age of map streaming we thought it high time that we met up with you to discuss Muldraugh, and beyond. The map in the current RC2 public test builds is comprised of two 300×300 cells, not including incidental connecting cells – one of which contains the town, and another with a farm. The map we’re currently constructing for RC3 though? Well that’s a 15 by 15 grid of these cells – so 225 of them in all. Cripes, but that sounds a lot doesn’t it? How on earth will we fill it all in?

“At the moment, there are around four cells that myself and Mash have finished our specific building placements on” explained Andy ‘Binky’ Hodgetts when I msn-ed him this morning for Monday blog content. “That’s twice as large as RC2 already, albeit with more a lot more content since the farm cell was just one building with a well and some fields. The big difference is that in a huge chunk of the over-arching map we’ve actually now pre-designed all the currently unfilled cells – so instead of just being filled with random trees there are roads and paths, and that sort of thing. So if you wanted to, you could wander off and find spaces where we’ll be building new map content in future updates. We’re already amassing quite a catalogue of buildings still not present in the world.”

In fact, it looks just a little bit like this:

“The new map is designed from a sort of satellite perspective,” continues Binky. “The layout is done first, and then it’s chopped up into cells and then filled with content. So all the cells fit together seamlessly, and you can wander around with the map streaming. In the future, it’ll just be a case of filling the spaces we’ve already laid out. We know what goes in the gaps – we just need to put the stuff in there! Eventually, we hope to expand the world even further taking us to other towns nearby. ”

As such when you spawn in the new map you’ll only hit entirely random wilderness after walking seven or eight cells in any direction – so seven or eight times the width of the RC2 map. There won’t be much to see outside of the Muldraugh we’ve designed so far – but it will be there.

Is that a little… too big? “Nah. Big is good.” types Binky, presumably one-handedly while he gurgles his morning latte. “Big means more stuff that you’re unlikely to find, more of a feeling of isolation when you trek off to the middle of no-where to camp out in the wilderness.”

Not everyone realises it, meanwhile, but we’re also using the real-world town of Muldraugh in Kentucky as our model. What was once randomly selected on Google Earth due to its proximity to Fort Knox and Will’s love of Goldfinger, is now something like our actual design target.

“We’ve been reeeeasonably faithful to Muldraugh.” Explains Binks. “We’ve taken some liberties with it, and obviously Zomboid is an isometric game so we’re confined somewhat by the shapes of things. Then again, while we haven’t gone so nuts as to do a 1:1 correlation of buildings – the layout is roughly accurate. We’ve made sure that there’s the same sorts of buildings present. People could, for example, find it on Google maps and recognise certain features and also, if they wished, have a scroll around and make some fairly accurate predictions about things to come.”

With map streaming and the potential for epic strolls through the wilderness, then, we’re making sure that we’re giving Project Zomboid room to breathe. Future updates will see us building new areas by hand and adding them to the map, rather than just haphazardly bolting them onto the side. We’ve given ourselves a massive canvas, and will be building forever outwards – although of course when we release all our modding tools there’ll be absolutely nothing to stop PZ survivors from adding their own creations to the sprawling map too. Death will always be inevitable, of course, but that doesn’t mean you won’t be able to find somewhere interesting to actually perish…