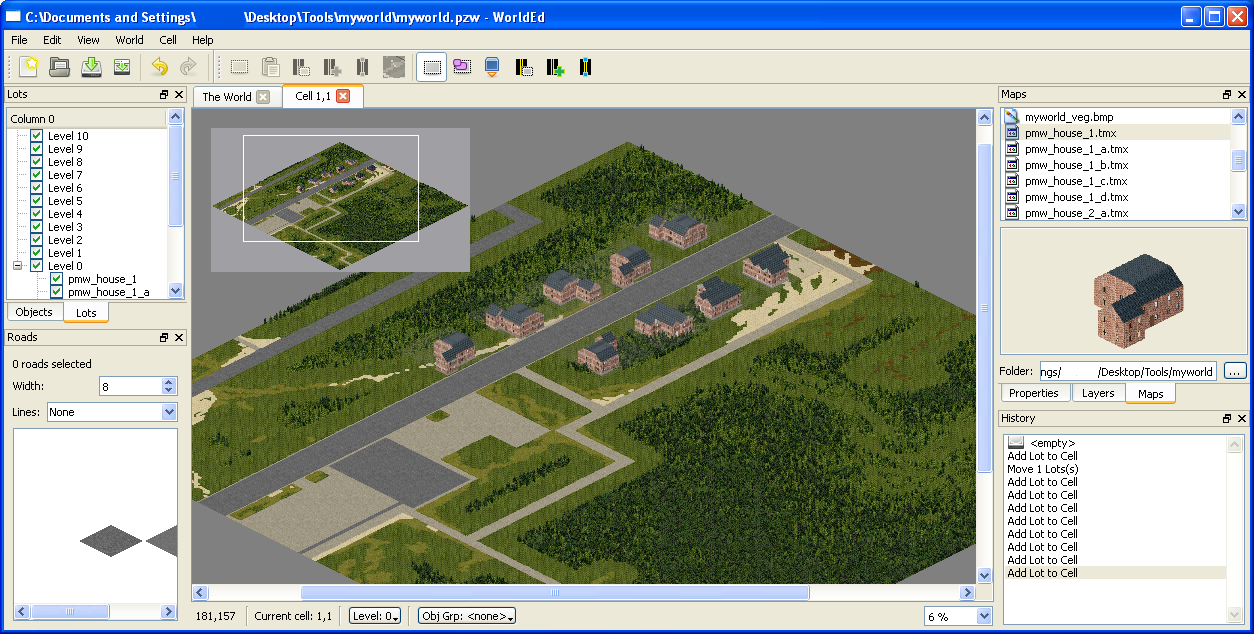 Evening all, as promised here’s a quick midweek look at the modding tools for RC3 that are currently being developed by the wonder that is Mister EasyPickins. The bottom line is that the forthcoming update will have much more complete modding tools and modding support – with a new version of TileZed and the new WorldEd both fundamentally speeding up the process of making maps. Once RC3 is off the starting blocks we’ll release these alongside an official modding competition – and, if you lot are up for it, then we’ll hopefully see some cool stuff rearing its head.

Once we’ve hit RC3 mods will be… well… they’ll be a lot more modular. Anyone familiar with, for example, Skyrim mods will recognise similarities in the RC3 build’s new modding architecture. A lot of mods for current versions of PZ require the overwriting of files, so it’s sometimes difficult to get them to play nicely together. In the new code we’ve altered the mod architecture to allow for mods to reside completely in their own directory, and to override any files with the same filename as a file in the mod. As such, this’ll let us support enabled / disabled mods, which’ll then allow you to disable mods without uninstalling them – or indeed dabbling in mod ordering to help with those mod compatibility issues.

Throughout the game, then, mod support will be far more robust, and allow for easier combinations of non-conflicting mods while you dodge the zeds.

a) The WorldEd Ends With You

Your first step in map creation for RC3, and beyond, will be to create a bitmap image which you can draw straight onto in your favourite art package. Different colours will denote grass, dirt, sand or road. After this you’ll create another bitmap, which’ll allows you to specify foliage – mainly the trees and areas covered in long grass.

These can then be fed into WorldEd, which will generate tmx map files for every 300×300 sized cell that your lovely new bitmap covers. Using this new tool it’ll be easy to quickly generate huge areas of wilderness – with moddable rules for exactly what tile combinations can appear on your lovingly placed colours. For example, adding berry plants for people to forage will just be a case of adding them as a low probability tile that can appear on a certain type of foliage.

On top of this there’s a road editing system, where you can place sections of tarmac with differing tile selections and draw them around the map – so easily editable transport networks will be a lock.

The WorldEd program will also let you look around your world map and double click any cell to zoom in – letting you see it as it would appear in TileZed or in-game (minus the lighting). It’ll also be a cinch to drag over TileZed files (such as buildings) directly onto your WorldEd map to place them. From WorldEd, too, files can be exported directly into your own world directory and inside a mod directory that’ll be available to play straight away from the main game menu – if that mod is active.

BuildingEd is an extension that sits inside the new builds of TileZed (the map editor used in currently available builds of the game). You may remember a video of our early from a while back. ( video link)

This is now much more powerful, and will let you create multi-tile objects (such as beds, baths and wardrobes) and place them as single entities that can be moved and rotated – and even have them automatically align to walls. If you want to ‘dirty up’ your soon-to-be-safehouse, meanwhile, then you’ll be able to auto-place grime on the walls and floors.

On top of this, BuildingEd has a ‘named room’ system which’ll tie into the game’s item spawning system. Add in a kitchen and it’ll automatically have kitchen-type things spawning in it – soup, can openers, the works. You’ll also be able to create templates from existing buildings, which’ll allow you to neatly and systematically build similar buildings using that same decor and furniture. You can now also add roofs to buildings using various different slope designs, which takes a bunch of pain out of adding gradients to the tops of your brick monstrosities.

Finally, while you’re playing architect there are two ways to view the action – either from a top down perspective or an editable isometric view – which you can switch between at will. Pretty nifty huh?

That’s your midweek rundown on where we’re going with modding, then. It’s potentially dry content for some, which is why we didn’t go crazy with it in a Monday blog, but it’s also what the PZ team are most excited about when it comes to our community and future Zomboid. Our eternal thanks goes out to EasyPickins for all his hard work.

Modding | 28 August 2013
Project Zomboid | Copyright © The Indie Stone 2023. All Rights Reserved.
Site by Redwire
Stable Build: 41.78.16 | IWBUMS Beta: 41.78.16 | Version history | Wiki
Follow us
Manage Cookie Consent
To provide the best experience, we use technologies like cookies to store and/or access device information. Consenting to these technologies will allow us to process data such as browsing behaviour or unique IDs on this site. Not consenting or withdrawing consent, may adversely affect certain features and functions.
Manage options Manage services Manage vendors Read more about these purposes
View preferences
{title} {title} {title}