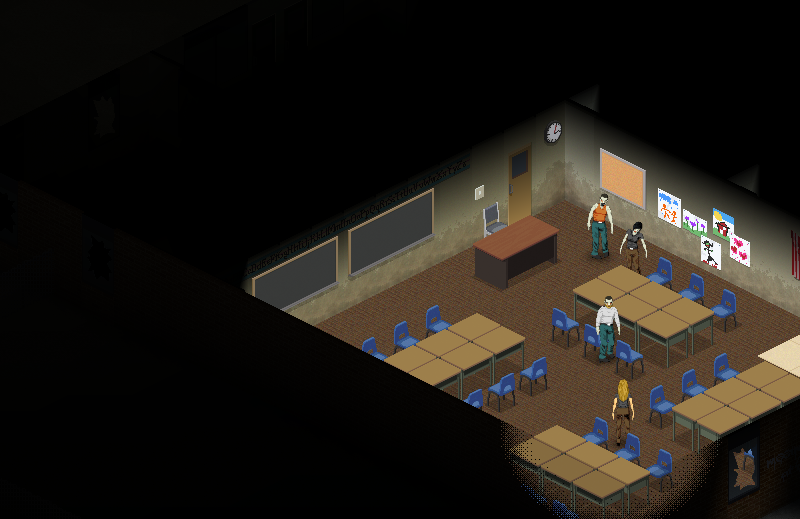 Yes, it’s true. As of 01:27 AM this past Friday morning the RC3 build (as discussed last week) entered closed testing. No, that’s not an April Fools gag. It’s a thing that actually happened. (Our April Fools jape comes toward the end of this blogpost and has been conveniently highlighted by the use of italics.)

So, yeah. We’ve got a small gang of hand-picked testers beavering away in Muldraugh and spotlighting everything that’s standing in the way of the revamped RC3 build being a fun and stable experience for everyone to gorge upon.

Early indications are looking good. Our main fear was that of performance – and thankfully we’re seeing better results than any 0.2.0 build ever had. Seeing as we haven’t implemented an option to turn off the shaders yet, this should hopefully trickle into a substantial performance boost for those who use low graphics settings.

That said, as expected, there are some clear issues we need to resolve. We’ve got a few crash bugs, music issues, a bunch of map niggles and a fair wedge of loot balancing to wade through. We’ll likely need to make some minor tweaks to the revised mouse-driven combat too – which doesn’t seem to be as immediately intuitive to established PZ players as we’d hoped.

Add into this the various new systems that were 90% completed but waiting for testing so we could balance and finalise them, and you can see that there’s still plenty for us to be getting our teeth into.

Work has been intense throughout the Easter weekend – we’ve had three internal test versions already and are due to release a fourth on this cherished Mondoid. It’s after the next couple that we should start to see more prolonged gameplay, and start balancing it up to a fun quota that’s acceptable in terms of widening the process to the whole community. It’s all terribly exciting.

We’re confident that the wait until release won’t be that long, but we’re certainly talking in the scope of weeks rather than days. The build needs to be enjoyable and as free of serious bugs as possible: after everyone’s long wait and the patchy nature of the 0.2.0 builds we need to be bang on the money.

So now, a bit of a video from internal test build number four. While we’re not quite at the stage where a full playthrough is possible, we’re celebrating going into closed testing by leaving all the bugs in the footage instead of editing them out or chopping together tiny videos. See if you can spot them all! We’ll look into a more in-depth gameplay video as soon as we can. (We see no reason why that won’t be possible next Mondoid.)

Now, some random, albeit random with a positive bias, quotes from a few members of the tester group. (Please note that surrounding these there were an awful lot of posts saying stuff like: “Exception: java.lang.OutOfMemoryError thrown from the UncaughtExceptionHandler in thread ‘Main’”).

“Zombies now have fast enough attack speed to make running through them a very bad idea!”

“There is no pausing or desktop popping on my Radeon 5700!”

“The warning and menu layout? Awesome.”

“It’s good to see shadows… it looks really different aesthetically. Also, I haven’t seen much of the map yet, but I’m digging what I’ve seen so far! It really looks like an American town with the flag poles and motel-like buildings… and grills in the backyards. Even graffiti. Loving it.”

“Was just attacked by a small group of zombies while opening a window and MURDERED. Zombies are now finally a huge threat!”

“The amount of zombies you have onscreen is pretty darn fun. It was great, trying to make my way out of the horde’s midst before nightfall while exploring the new homes. And look, washing machines! And kids’ rooms! (Why, I remember a suggestion on that just a few days ago…)”

“The extra strike on downed zombies looks and feels great. “

“Getting solid performance, it’s ridiculous! Possibly the best performance wise of any build so far, so gratz on the optimization! I’m getting around 60-75fps on general, full screen and res is 1920×1080 (my native). Then around 45-50 with a truckload of Zombies.”

“I got nom-nom’d by a zombie while moving some bandages from one bag to the other. Zombies feel really dangerous now – tough enough to cause the end of the world.”

So it’s time for our exciting April Fools joke! Wait for it…

We should let people know that due to the performance issues with lots of zombies, we’ve decided to offload some of the complex computational work for the zombies pathfinding onto the cloud, but as a by-product of that it means PZ will have to be connected to the internet at all times during gameplay. Hope you don’t mind.

So, did you fall for our April Fools joke? Do let us know in the comments. (As a further April Fools joke we’ve neglected to mention that comments are disabled. You’ll probably have to head to the forum.)

More as it happens Zomboidateers. 🙂

The Blood. The Sweat. The Testing.