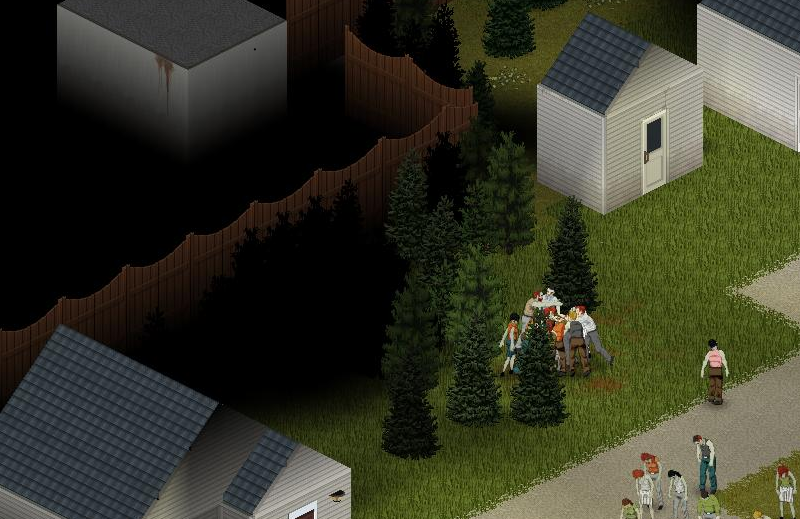 In order to finalise work on NPCs and the NPC metagame we needed to bring the overall game back to working order – integrate the new map, look at balancing, knock out gameplay bugs and essentially get the game up and running before our little survivor chaps could sprint around their apocalyptic playground. As regular Mondoiders will be aware, that’s what our coders have been up to these past few weeks in the build-up to a closed test.

The natural course of development, then, is going to leave us with a build that (with some polish work, launcher fiddling and whatnot) would be fun without NPCs, packed with new features and (in all likelihood) far more stable than the 2.5 releases. Given the ongoing PZ drought, and the fact NPCs die out so soon in RC2.5 they are hardly a factor, it struck us that we’d be pretty daft not to release it after the closed test, and finally give everyone something to play.

This won’t have any effect on the date of the final metagame/NPC delivery (we’d like to underline this – if people want to wait for the full release the overall goalposts aren’t being moved) – but brings the benefits of, in the mean-time, us being able to get the modding community rolling again with the release of EasyPickins’ mod tools and launching our spangly new website sooner than hoped. We’d also be able to get the new build delivery system going – releasing regular bug fixes with the efforts of our two coders combined.

SO WHAT’LL BE IN IT?

A lot. The vast new map (covering pretty much all of Muldraugh, and more besides), the roots of the meta-game system that cover zombies and zombie migration, map streaming, farming, the new skill and trait system, carpentry, female characters, better character customisation, loads of new animations, new shaders, new lighting, sandbox options, the new front-end, the new UI, the backpack system, the modding system, music and all the bug fixes that 2.5 has been crying out for – for so long. Plus a bunch of stuff we’ve probably forgotten about.

(A clear omission would be the K&B tutorial – so we’d explain the situation and the current NPC status to non-Mondoiders via an on-load screen.)

We had a blood curdling zombie pathfinding issue that completely rendered zombies unable to work indoors (which we discussed last Mondoid) which was finally resolved last night after seven days of intense zombie/doorframe fury.

That delayed us, but now the things left on the Closed Test (without NPCs) ‘To Do’ list are: fix a memory problem that manifests in 32bit versions of the game, nix some small save bugs, update to the latest map version and make our release builder work with the new version of Java we’ve upgraded to. This work will, one would hope, be completed in the next day or two – after which Closed Testing will begin.

As mentioned previously, however, we’ll let everyone know the second the build is entering testing via our @theindiestone Twitter account.

SO CAN I BE IN THE CLOSED TEST?

Unfortunately the testing group is small and handpicked. You’re also really, genuinely, not going to be missing out on anything. We’re looking for game-breaking, system-crashing and 100% non-fun stuff. We’re very much intent on getting the game to a high quality bar before release in terms of show-stopping bugs, but once we open up the test to the wider Zomboid community the issues that everyone can help us with will be issues that crop up on your particular system, things that happen after lengthy survival times, getting people’s opinions on zombie counts etc.

SO HOW LONG WILL CLOSED TESTING LAST?

Well, that’s the million dollar question. Another patchy release patently will not do for us or our players, so if the build needs to be kept in the oven till it’s ready – it’s going to be kept in the oven. There are also always unseen dangers in testing when it comes to game performance – this is where demons may lie and will be the danger when it comes to desktop game development. There are many different types of machine out there, and it’s hard to specify until the build has run on a bunch of them.

This said, we now finally have two coders able to bash through bugs, so we anticipate that any undiscovered issues with the game to be pretty fast to sort out. The best policy will probably be to get the game into testing first, see how things go down – and keep you informed via Mondoid blogs, @theindiestone and the forum. We’ll also, clearly, be able to supply a lot more screenshots, videos and whatnot once the process begins.

The same closed testing process will then later repeat once the NPC metagame overlay has been completed. (The work for which, let’s not forget, is already 80% done.)

SO, ALSO, I NOTICED THAT ‘STEAM EARLY ACCESS’ THING

That was the ‘announcement’ we alluded to last week, and we’ve had a preliminary chat with Valve about it all. One reason we’ve been historically cautious about going onto Steam was that there’s a certain level of quality, completeness and polish that’s needed to avoid risking a lot of bad feeling when appearing on the Steam store, as some notable releases of recent times have shown us.

While we would have been careful to make a clear point of PZ’s in-development state, one thing we’ve learnt is that no matter how clearly you label something in text, sometimes people miss this information. That’s all seems to have changed now with Steam Early Access. They are clearly advertised as ‘in-development’ within Steam itself, and therefore we would be a lot more comfortable going in there sooner than we originally planned.

All this said, it’s clearly not our priority – which is fundamentally to our current players and to our builds on Desura. Our entrance to Steam (early access or not) will only be when we’re in the groove of releasing regular updates and fixes, the game is bug-free, NPCs are running around and the meta-game is in place. Above all, we need to ensure our existing audience’s happiness moodle is showing before we go chasing around trying to widen it.

That’s all for now survivors. More as it happens. 🙂