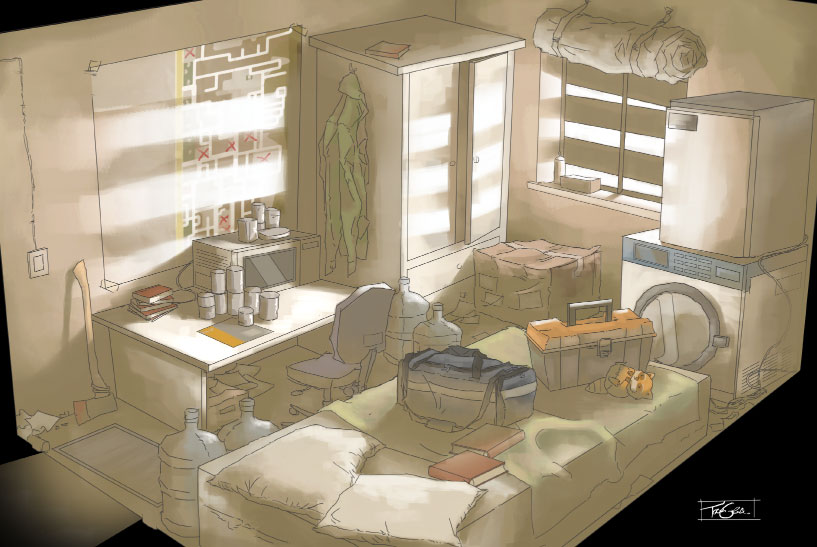 Here’s a second helping of APZDTISA – or Ask Project Zomboid Developers The Indie Stone Anything – to titillate and/or delight. Thank you so much for everyone’s questions there really were some crackers in there, thus the need to spread it over two Mondoids!

When in multiplayer and in melee combat with another player can the other player or yourself be knocked down and then pummeled until they die or will it remain a swing fest?

BINKY: We’d prefer it to be done in the way which is the most satisfying to play. We will be expanding the range of combat animations which will open up some possibilities for the way combat works generally. For example getting a greater sensation of impact, and providing for exhausting but adrenaline-fuelled pummeling. Stuff like that would be awesome.

Will bladed weapons, or weapons in general, ever get stuck inside a zombie I just downed?

BINKY: That would be cool. But I couldn’t confirm either way at this stage. It certainly sounds like the sort of thing we’d be tempted to try out though.

Are there currently any feasible plans to release the expanded modding tools (particularly a model/skin editor) to the community in the near future?

BINKY: Well, modding the 3D characters is as easy now as swapping a texture. More fundamental changes however, actual mesh alterations, would be a bit finicky as our tool-chain stands right now. Not impossible, but a pain in the arse. If we can find some way to make this more straight-forward for modding, we will do that.

Once PZ is completed, would you ever consider bringing it to consoles as a downloadable game?

LEMMY: We’re asked this a lot, and the answer is that we’d love to do this. However we made the game in Java so as to make it cross platform on desktop machines, so it would essentially need a full rewrite to appear on consoles. If this were to happen it would be too much work for our team, so we would require outside help from a publisher, or be able to pay an external company of some kind. The likelihood of that depends entirely on how PZ goes in future, so we’ll see!

Will there be a possibility to craft crude tools like a wooden hammer or some kind of essentials at a greatly reduced effectiveness?

LEMMY: This is definitely planned, however at the moment having to locate specific items, as well as get backups, by looting is a large part of the gameplay and to allow crafting of these would make looting a lot less interesting as well as drag a lot of late game stuff too early and eat up a large part of the progression in the game. We do agree it’s needed but it’s trying to find a way to do it that feels fair but not too OP. (Another possibility is that with the introduction of NPCs it will stir up the gameplay enough that craftable tools feel less OP anyway.)

We’ve got so many different ways to acquire food now, but we currently lack any method of preserving it, so we risk losing out on excess food supplies if we farm, fish, or hunt too much. What plans do you have for food preservation, to prevent such quandaries? And what plans do you have to make use of food that has rotted? A compost heap would be awesome.

ROMAIN: A good chef can already use some part of the rotten food, for preservation, I need to make some research, but jar, cans or even salt could be a good way to preserve food a bit. I guess I need to ask my grandmother how she preserves her delicious tomatoes and other vegetables. :p

Are there any plans for nighttime downtime in multiplayer? In a normal game your character would ‘sleep’ but in multiplayer there’s not much to do other than hide in a closet and take a break from the game.

ROMAIN: Sleeping is planned as a server option, just like Minecraft. When everyone sleeps time will go faster – just as in single player. So that would be the plan for a small co-op server, but taking a nap is also planned on bigger multiplayer servers.

Are there any plans to overhaul the fatigue system to account for long-term fatigue, rather than just immediate fatigue?

ROMAIN: A fatigue overhaul isn’t on my list right now, but it’s definitely been at the back of my mind for a while now. The build-up of fatigue over long period would be a good addition. We will need to add sleeping/naps in multiplayer first though, so players can have a rest, eat food and drink coffee – which would then have an impact on the fatigue.

How ‘real like’ will the NPC’s be, for example will they even have different personalities, if you will, and will they react differently?

LEMMY: Very much so, this is pretty much the key mechanic of the NPCs. They have a set of character traits, of which their traits all tend to bleed into each other. A character may be aggressive, cruel and devious and all these traits would both affect any choices they make at any point, as well as affect their opinions and relationships with other NPCs. So an aggressive, cruel and devious person may be an extremely dangerous and explosive elements to add to your safehouse.

Of course every NPC’s list of traits are in a random order too. This determines how obvious those traits are from your first impression, or having to know the person well before it becomes apparent. So some traits may be buried deep in the NPC’s psyche, while still affecting their decisions and opinions, others are unlikely to know about it before it’s too late.

How will we get to see the seasons? For example in winter, will the tiles slowly turn white via a shader / overlay texture, will there be actual winter animations, will the clothing and other visuals on people turn into a snowy texture?

As it currently stands, the snow will appear at some point overnight, but we’ll look into adding some snowing animations (similar to the rain) 🙂  It would look a bit strange if tiles just turned white, and since all the tiles are 2D-based, adding snow incrementally would require sprites for each stage which would require a lot of time for little payoff.

Do you plan on overhauling the wilderness? I don’t care if the world is flat but I would enjoy some big trxees with canopies that we can walk under. For too long we have been slowed down by trees.
There is a wilderness overhaul planned, however tree canopies present some technical problems involving how “floors” disappear and how to do this without making the trees look terrible. So, it would be nice to have, but it’s lower down the priority list than other aspects of map development.

How big do you plan the main map to become?
Pretty big! You can read more about it here.

Thanks for all the spiffin’ questions, and a special thank you to Brybry for reporting some nasty MP security bugs! Normal Mondoid services shall recommence next week ; )

APZDTISA IV: The Quest for Peace