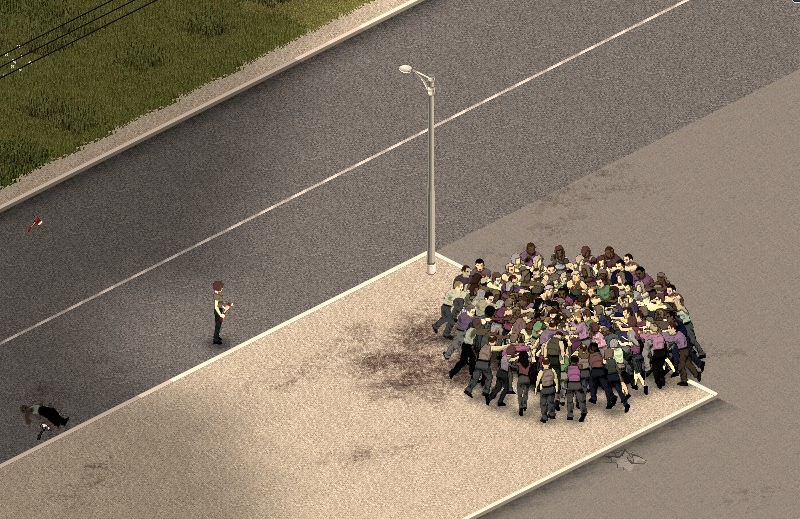 Today we come to you with an awesome new mode for Build 33 that should have an explosive impact on the Project Zomboid modding and mapping scene, as well as providing a fun new way to play the game.

Creative Mode is something we first experimented with in the dim and distant past, but came back to mind when we were looking at the speed of our own map production and the tools that we use. The Louisville map we’re building is very ambitious so, alongside EasyPickins’ awesome existing mapping systems, we started to think about ways we could populate our world more quickly.

At the same time in development, meanwhile, TurboTuTone’s awesome furniture decoration system arrived on the scene for Build 33 – while General Arcade and EP’s work on Steam Integration meant that Steam Workshop was also suddenly in the offing.

Put them together, and what have you got?

When we started Zomboid, and agreed upon a static map for the game, we (perhaps optimistically) anticipated hundreds of maps for players to download to provide almost unlimited amount of exploration. Despite there been some amazing map projects already released, this didn’t quite happen. The learning curve for the toolset, the drudge of copying files, the exporting and all the rest made it an intimidating process.

Creative Mode, we hope, takes all that away. It lets you build maps faster, have fun and work as a team. In essence, it lets you edit the map in any way you can imagine. You can use any buildings or other map pieces available: whether you’re subscribed to them on Steam Workshop, copying and pasting them from the existing PZ map or creating them yourself.

It’s a mode that lets you, as an in-game Zomboid character, create extra buildings, districts, even complete towns and cities. What’s more, absolutely anything can be shared to the Workshop – at the moment via an external app, but soon straight from the game itself. Coming back the other way, anything you’re subscribed to will automatically be available to place within Creative Mode.

Furthermore, Creative Mode works completely in online multiplayer, so players can join forces to build an entire town on their server – before using it as a fun and engaging place to die from zombies. Split screen support isn’t currently coded, but will certainly be something we look into as we refine the system.

In terms of Build 33 – the first version of Creative Mode will cover only the essentials: containing basic house construction, furniture population, landscaping and so on. As we roll it out further, however, we’ll provide additional tools that will let you create neat road systems, sidewalks, gardens, fences, levels of erosion and all that fun stuff.

It’s our dearest hope that by empowering everyone and anyone to make map content and share it via the Steam Workshop, and in making the process of building as fun and as co-operative as we possibly can, we’ll foster a new community of building-obsessed doozer players and a flood of new map content. Every player’s game world could potentially be many orders of magnitude bigger than the current Zomboid map, and potentially completely unique to them, or their server and their community.

Then if all servers have their own unique maps, who’s to say we couldn’t see about giving them an option to have their borders connected one day? With Build 33 the Zomboid infection will be easier to spread than ever before. Exciting times!

Before we go something else that happened last week and was a bit exciting was that Mike Laidlaw the Creative Director of the ace Dragon Age games at BioWare streamed some PZ – and provided what was an excellent guide and tutorial for the game. It seems Twiggy has some competition! You can view his butterknife and bacon adventures here. Byeee!

This week’s featured image from Muflex over on Steam. Would you like to have an inbox full of Monday musings, update notifications and maybe even fix lists? Just clickify and notify.