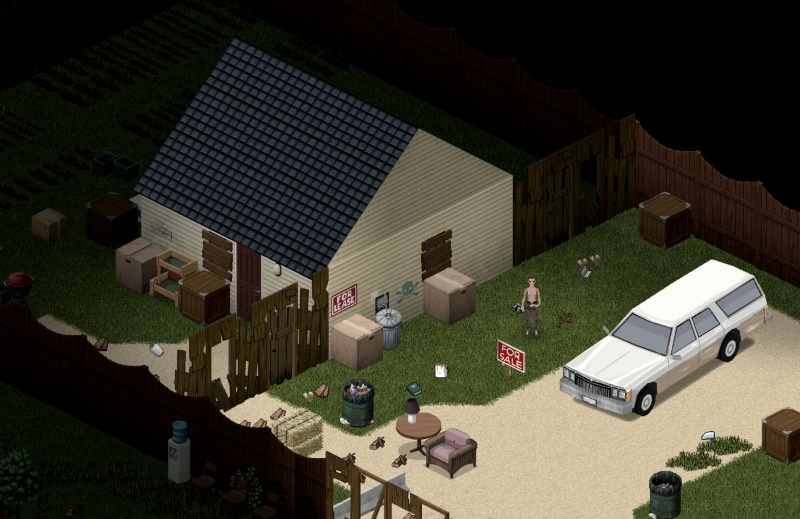 Evening all! Last week’s vehicles release felt like it went well. The release version was fairly stable, people are enjoying having transport in the game and we’ve seen a huge boost in player numbers – which has in-turn revealed plenty of bugs for us to squash over the next few weeks in patches. Many thanks for all your reports, and please keep them coming!

There are clearly a lot of people returning to the game and wanting to get their friends involved on co-op, so we’ve also decided to put the game on sale from tomorrow for a few days with 40% off. (If people find this helpful we’ll probably do so again whenever bigger features get into the main game.)

We’ve been running an IWBUMS patching some of the more serious issues – but due to the expanded number of people currently playing MP we don’t want to mix it into the fairly stable release build without giving it its due testing.

As such, if you fancy grabbing some free PZ codes for participation, then keep your eyes on the forum over the next few days / week and we will likely be running some impromptu community IWBUMS megatests for those on the beta channel.

UPDATE: In addition we have just updated 39.67.2. In amongst many and varied other things, currently in the patch we have:

Fixes we are still working on include disappearing keys in MP when someone else removes the key from the ignition, occasional vertical parking splurges (!) and a few cases of MP invisible zombies. If people notice any particular replication steps for any of the above then we’d love to hear them in our bug report section on the forum.

We’ve got a few complete, and almost complete, things that were a bit logjammed while we polished vehicles that we’re hoping to drop into testing over the coming weeks, mainly the new MP chatbox and Turbo’s ‘virtual climate’ weather and seasons upgrade.

In the past week Turbo’s worked out ways to show fog/precipitation from inside buildings, but our larger and taller buildings (mall, prison etc) need some extra thought, as do outside balconies – although this does look pleasingly Exorcist-y even with the visual bug. Here’s a quick video of the fog system as nature intended it though…

Meanwhile, over with our friends at T.E.A. the animation build push continues. One aspect of this is that Zac, who is working on the new dev and modding tool AnimZed, has built a nifty clothing and outfit editor into it – from which both ourselves and modders will be able to easily hook up new models and textures to items, and create new looks for zeds and survivors alike.

If you didn’t see some of these looks in our vid the other week you can check it out here. The updated tool within AnimZed looks a bit like this currently, although the bottom of the left hand column did raise some eyebrows…

This tool work is probably going to be followed up with another utility that shows in-game items vs the visual items. At the moment we/TEA/modders have to check an item’s name, then lookup how it appears in-game separately and it would be very handy to have it done in an automated fashion.

Elsewhere Gareth has been tweaking/polishing shaders for body masks, and Bitbaboon Mark has been blending, simplifying and ironing out kinks so that our animator Martin can jump in and get used to the new suite of tools available to him and polish up his work in-game. So hopefully we’ll have a bit more to show/discuss next week.

Thanks so much for all your continuing feedback and bug reports on the vehicles everyone. Please keep it coming!

This week’s station wagon from Julio. A general list of stuff added to PZ, and vids of features being worked on, is kept here – so you don’t have to plough through endless dev blogs for info. The Centralized Block of Italicised Text would like to direct your attention to the PZ Wiki should you feel like editing or amending something, and the PZ Mailing List that can send blogs like this and patch notes direct to your mailbox. We also live on Twitter right here! Our Discord is open for chat and hijinks too.