Okay, let’s go for a quick around-the-houses on stuff currently being brewed for future updates to the IWBUMS Build 41 beta, while Zac and Mark’s work continues on MP in the background.

Yuri’s work on the realistic spread of fire, and how the game deals with it on both an SP and an MP map, continues. Fire is one of the earliest systems that was ever put into PZ, and it’s been needing an update for the longest time.

Right now Yuri has worked out a way in which the game automatically creates a 1000×1000 tile saved map of potentially combustible materials when you play. This is then stored separately from the usual map files for load reasons.

Yuri is also working on a way to save and load a separate internal list of burning tiles, from which calculations for the spread of fire will be taken.

Here, for your viewing pleasure, is an example of one of these maps – showing all wooden tiles in a section of map that could potentially get set on fire. 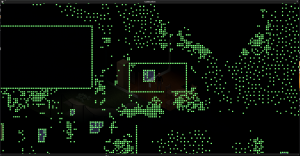 Here at TIS we dislike the ability for players to walk backwards while batting down a long line of pursuing zeds – perhaps letting you take out 20 or so without breaking much of a sweat.

To this end for a lot of the Build 41 beta’s life there has been a slight pause when you pull back your bat or golf club – which we’ve seen as a necessary evil.

It works fine, but it’s never been a perfect solution – you guys and gals have gotten used to it overall but it’s never sat that well with some of us. As such right now we are experimenting internally with various zombie tweaks, slightly changed backpedalling and strafing anims and a few other nips and tucks to see if we can find something that works a little better.

We can’t promise anything, but so far have a few promising leads that (fingers crossed) will be a part of the upcoming 41.34 patch. Improving stealth is also on the agenda.

Now we have crisper character models we can also have more detail in terms of what’s shown on them. To this end RJ has been adding in visible scratches, lacerations and bites on the player’s body – which will be plain to see once you’ve removed your bloodstained clothing.

We will tweet out a quick demonstration gif of this later, as the internal dev video supplied was soundtracked by Marilyn Manson and we don’t want to enter any legal dispute with him.

Potentially due for build integration when MP comes online, Turbo has been looking at ways to optimize byte size for savefiles and online MP packets. PZ saves are pretty gargantuan, and Turbo currently has a test save taken after a simple circular walk around Riverside that was previously 24.8 MB and now cut down to 6.1 MB.

We know this sort of stuff probably doesn’t sound too exciting, but it’ll be great for the game – and something we’ve long pined for.

How could we not mention the single best thing we’ve seen so far created using Build 41 as a base?

Seriously Kopereview – this is some cool-ass shit. Thank you so much for providing some light in a difficult week. 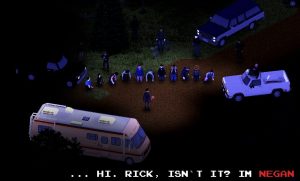 This week’s homemade bar from Kornbrony (again). A general list of stuff added to PZ, and vids of features being worked on, is kept here – so you don’t have to plough through endless dev blogs for info. The Centralized Block of Italicised Text would like to direct your attention to the PZ Wiki should you feel like editing or amending something, and the PZ Mailing List that can send blogs like this and patch notes direct to your mailbox. We also live on Twitter right here! Our Discord is open for chat and hijinks too!