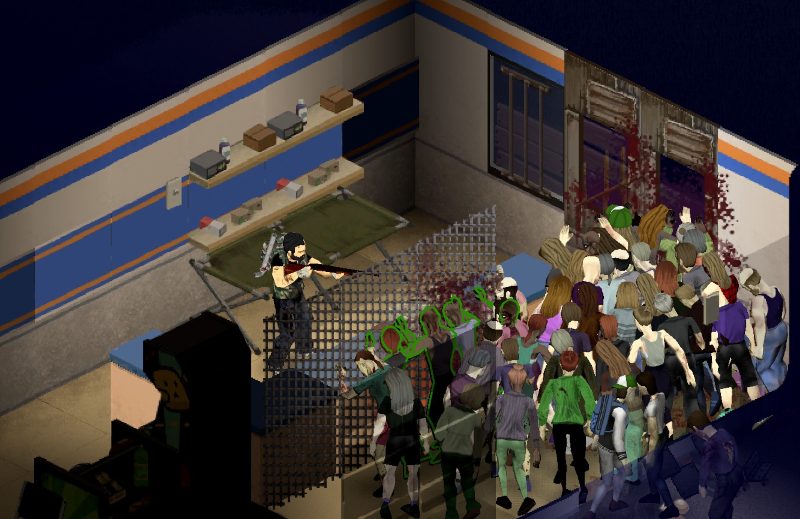 First, an MP update from the Strike Force.

Andrei and Yuri have been working on the client ownership of zombies this week. For those unaware this is a system that’s designed to remove all latency from zombies chasing the player.

1) On a high server count, if players are all separate from each other in the world, the server needs to keep track of sometimes potentially thousands of full AI zombies. This can get extremely taxing on the server.

2) Compounded by the first problem, zombie AI has to then be transmitted to the clients to show the zombie positions. Zombie movement and bites are done on the server and thus only travel to the clients with latency, meaning clients are viewing zombies slightly in the past and thus, especially if the server gets clogged or data packets are lost on the way to the client being chased, they could see an unfair death due to a lag spike.

The system being worked on now means that the server determines ownership for each zombie. The server is owner for zombies if the zombies are standing or idly walking, which means it will keep track of their movement and position using its own AI routines.

With Yuri and Andrei’s latest work, the client now has ownership transferred to it under certain circumstances and becomes the owner for zombies.

The server will eventually check to make sure the zombies are behaving normally to avoid cheats, but otherwise zombies that are chasing or attacking players will be processed entirely on the client of whom is being chased, and transmitted back to the server.

Eventually the decision will be made whether to process zombies independently on all clients, to maintain smooth movement in critical situations, or whether a chasing zombie is only processed on the client its chasing and not on other clients witnessing that. This is a decision for another day.

In process of developing this feature, Yuri and Andrei have coded it so if the zombie lunge to player or attack player, the client they are attacking will take ownership of the zombie.

Notice the triangle under some zombies. This is to show that the client is owner of this zombie, and thus all AI is being carried out on the client – thus happening without any latency whatsoever. Otherwise, the server is owner of the zombie.

You can see that the server is owner for a zombie if said zombie is far from the player. The client becomes the owner of the zombie when the zombie comes close, before reverting again when the player runs away.

In this video you can also see that zombies are often updating their targets. This is an adjustment of the target using “ZombieUpdateTarget” packet. The video last week, while a huge improvement on zombie movement than b40 multiplayer, was updating the target point a zombie runs to extremely infrequently, which resulted in sudden turns instead of the smooth player tracking players are used to.

Balancing may still be needed to find a sweet spot between traffic and precision. We’ll see how it goes!

There’s still plenty of work on the table for the MP Strike Force, but week on week hopefully everyone can see the improvement, and level of quality we are aiming for, with the new multiplayer architecture.

The 41.38 patch is pretty much ready to go, our apologies for it not being earlier in the week but new tutorial glitches kept on jumping out of the woodwork. It’s the end of the Euro working day now though, and we’d like folks to be on-hand for any hotfixing that needs to be done – as it’s a patch with a lot of content that’s built up over the month. So we’ll be putting it out as soon as we’re able and at our keyboards, basically.

You’ll also notice that homes appear a lot more ‘lived in’ from some lovely little additions from Mash. Hope you enjoy it when we flip the switch, and as ever report any bugs or issues on the forums and we’ll try to get everything fixed up for you ASAP.

This week’s last stand from Battlemints. A changelist of all IWBUMS patches since the 41 beta was released can be found here. A general list of stuff added to PZ, and vids of features being worked on, is kept here – so you don’t have to plough through endless dev blogs for info. The Centralized Block of Italicised Text would like to direct your attention to the PZ Wiki should you feel like editing or amending something, and the PZ Mailing List that can send blogs like this and patch notes direct to your mailbox. We also live on Twitter right here! Our Discord is open for chat and hijinks too!