Zed is the new Orange 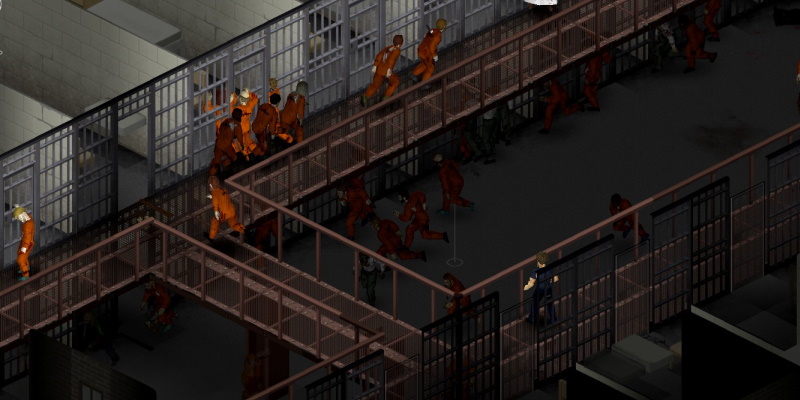 As mentioned in previous blogs, we’ve got a ‘soft’ content lock on Build 41 currently in that we’re primarily focussing on fixes, mod support, polish and new features that complement the game rather than add new complications.

This doesn’t mean that we can’t get some new, cool stuff in – but at this stage of Andrei and Yuri’s work in the Build 41 MP Strike Force we don’t want to be throwing in anything too radical that’ll change things up too much.

Work on other stuff is still ongoing and will be a part of Build 42, and shown when we’re closer to it.

The changelist for 41.42 can be seen here on our forums, and the highlights are as follows:

Meanwhile in the MP Strike Force

Yuri has been implementing syncing of player characters with animations, sending new player packets that allow for prediction of player positions and movement, to allow for much smoother character movement between clients.

Again, the same philosophy as the zombies has been used here, meaning there may be subtle differences between clients and the actual player who is moving, but they should never be large enough to account for actual issues with gameplay.

If we were a first person shooter with bullet hit registration and people expecting pixel perfect headshots, we may have a bigger problem, but we should be able to get something that looks good on all clients, even with a ton of zombies shuffling around demanding network traffic.

Here’s a little WIP video of Yuri’s efforts, at the moment the animations are currently applied to the wrong player, but you can see that the animation on players is definitely coming along.

As we reported last week, Andrei has been looking into memory issues with Build 40 multiplayer servers. It turned out that last week we erroneously blamed it soley on the garbage collector, something which became apparent not long after the thursdoid went out.

It seems that the fault was with map chunks not being unloaded in an orderly fashion, leading to a huge bloat in memory being used for map data and thus bringing out the worst with frequent GC pauses as the memory was mostly used up.

As such Andrei is now looking into better initialization of grid squares and has been tuning the garbage collector (unlike on clients, frequent smaller pauses are better here).

He’s also continuing work on trying to figure out how to keep the memory usage as low as possible to stop the servers getting into the muddle that so many of our Build 40 MP players are familiar with.

This week’s incarcerated carcasses from 사탕. A changelist of all IWBUMS patches since the 41 beta was released can be found here. A general list of stuff added to PZ, and vids of features being worked on, is kept here – so you don’t have to plough through endless dev blogs for info. The Centralized Block of Italicised Text would like to direct your attention to the PZ Wiki should you feel like editing or amending something, and the PZ Mailing List that can send you update notifications once builds get released. We also live on Twitter right here! Our Discord is open for chat and hijinks too!