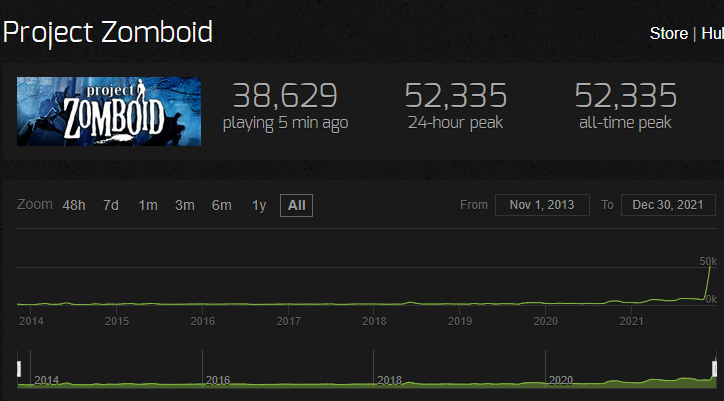 A short Thursdoid this week, and we’ll return to our normal larger update blogs from next week in our first 2022 blog! Where we’ll discuss where we’re going after build 41 has been finished off!

First of all, wow.

We’ve put a huge amount of work and time into this game, and while we always considered ourselves lucky to be able to sell more copies than a lot of indies who struggle to get their game noticed in the extremely competitive indie game dev scene, we never quite imagined we’d manage to break out in the way we have this past month.

It’s thanks to the tireless devs in our team who have worked on this game for years and made the game what it is through passion and blood and sweat, the support team who’ve had to try and get all our new players into the game when they have issues–despite this massive surge happening throughout the holidays, the community that have supported us the whole time through this journey and understood what we were trying to do, the incredible modding community who have expanded the game in so many ways and made diving into Zomboid many orders of magnitude more interesting, and it’s thanks to the content creators that have grown up alongside us, who’ve dedicated hundreds of hours of their content to Zomboid to introduce and entertain new players looking to dive in, and we’re overjoyed to see them get extra exposure as the game’s been thrust into many people’s line of sight.

There are so many links in the chain that led us to where we are, and we wish you all a happy new year and thank everyone for coming on this ride with us!

A few updates on our plans for the next patch for Build 41, which will be appearing in the new year!

There are likely countless other fixes that we have in the pipe, so if you don’t see your own particular issue listed here, it doesn’t mean we’re not aware of it or have a priority to fix it, more that this blog writer forgot about them! We’ll discuss more in the new year in the run up to the patch, which will likely be put into a public unstable branch first to ensure there are no issues that could cause problems for servers who do not wish to test the fixes.

A reminder to those operating public servers, that we cannot guarantee you won’t be hit by very destructive hackers or griefers, and its vitally important that if you’re willing to take the risk with public servers, then you practice frequent server back ups. In fact we’d recommend even white listed or private servers to consider server backups with some regularity, as its always possible a mod update or a game update could cause you problems.

As always, we suggest and recommend only whitelisted servers and running a public server is done at your own risk. If you want to be secure from hackers, it’s also not currently a good idea to display your server IP publicly or advertise its presence on the server list.

While we’ll constantly look to increase the security of the multiplayer, it was not the primary priority compared to providing a solid co-op experience during the long development, we’ll try and shore up any vulnerabilities in the packet security in the next build, but It will take some considerable time before we can implement solid anti-cheat measures given the open nature of our game’s architecture.

Sorry if this blog is a little short and perhaps we’ve forgotten some huge thing we were going to mention. Forgive us if our patch has to wait until the new year, and we’re a little more absent than we should be due to the holidays. The international team will be back up to full speed next week, with the Russian devs who’ve been hard at work over Xmas fixing up and adding stuff, who will be taking their holidays in early January.