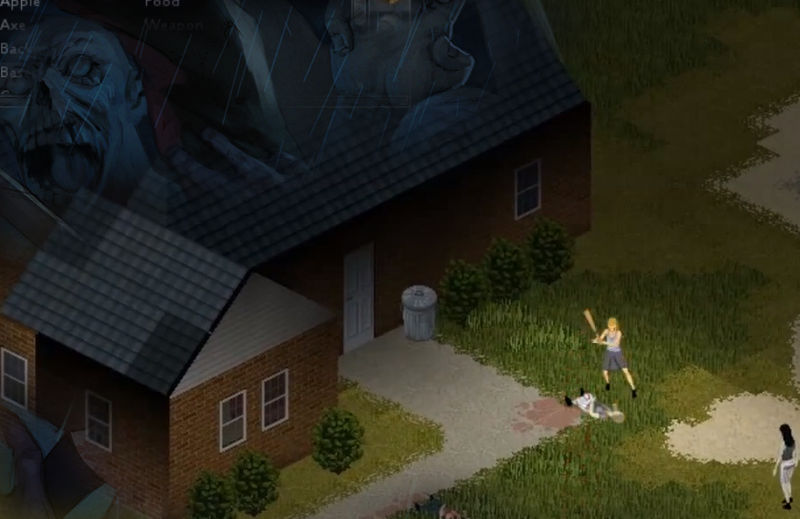 Good evening survivor. Do not be afraid. We come bearing PZ videos, and this suspicious looking wound was from falling over a log and DEFINITELY not a zombie biting us. No sirree. Not us. We’re as uninfected as the day is long.

The closer we get to RC3’s release the more fun videos we can show you and, in general, the less cool new ‘stuff’ we can tell you about that you don’t know about already. This said, here’s some info on some cool ‘new’ stuff you probably didn’t know about already! These two nuggets of fun have made their way into the PZ build while Chris’ climactic work on making the NPCs behave is being fed into the mainframe.

Before we delve too deeply, however, a quick note for Binky’s sake to underline that these vids were taken prior to his crisp-ifing enshrinkulation work on the sprites (first word mine, second word his). Annoyingly a fair amount of time this week has been lost to developer injuries, and nightmare sprite export lua bugs – but all is fixed now! Huzzah!

First up, then – strafing in-game, and the sad demise of Baldspot’s trademark moonwalk. All combat now works using left mouse button and WASD. Holding the left mouse button will start you aiming toward the mouse cursor, and WASD will then strafe pointing in that direction until you release the mouse button to swing. This means that aiming beyond the heads of zombies is back, since we now don’t have to rely on that old mouse click position to ensure that combat against a throng of deadheads is nightmarishly difficult. Clicking on zombies will still work though, obviously. Oh, and if you play with mouse-control alone then right-click will still move you around – though we’re still working on how to let you strafe at the same time. It all looks a little like this:

All this means the cramp-inducing ‘holding ctrl clench’ that was once integral to combat is no longer necessary, and you’ll have a lot more precision and tactical movement during combat. All this said, the old system will still work if you decide that your bread is buttered that way.

Next video to rattle to a halt deep within the Zomboid tombola, meanwhile, is a WIP peek at the integration of Romain’s excellent camping mod into the RC3 build. As well as showing off his system a smidge, it’s also a great way for everyone to get an understanding of how the new UI will make everyone’s survival in Muldraugh a little more efficient – if not necessarily easier. It’s worth noting that we will have a specific crafting panel at some point as well, however. (Please note any slow-down in the vid is down to Romain’s Fraps playing up, not the game code!)

Okay, so that’s the main orders of business over with for one Monday. Elsewhere Mash is busying designing new maps, Will’s doing fresh writing, RingoD’s scripting that writing and Romain is busying himself with a few features that’ll aid our budding gang of modders once RC3 hits.

A few nuggets of housekeeping to close – after RC3 hits we’ll be unveiling a new website (not built by us don’t worry!) and we’d like to have a spangly new forum to match it. We’ve hit on a few snags with the latter, so if you’re a forumite we’d quite like to hear your opinion on what’s going on in this thread.

Finally, we’ll be doing a full mod blog on it soon (if that’s okay Thuztor!) but the first rendition of the Vacation Island map has recently hit the boards. We love it. Please, please give it a whirl!

On voices in the darkness