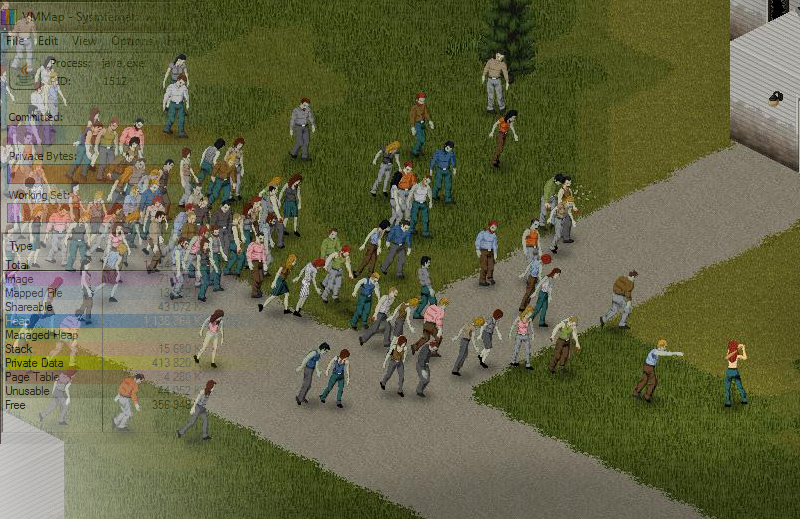 Hey everyone, sorry for the late and also rather barebones Mondoid this week, but it’s been a busy day at Indie Stone towers and given everyone’s eagerness for this build to get fixed up, we’re sure everyone would prefer we were hard at work than agonizing over the contents of this weeks Mondoid!

We’re still hard at work trying to figure out some strange memory issues on some 32bit systems causing the memory usage of OpenGL to 2gig and crashing the game, which is at this stage largely the cause of all remaining incompatibility issues.

Since build 7 is largely considered, relatively speaking, the most stable and fun build we’ve had in a long time (despite some issues with containers which does cause a lot of people problems) we would rather not put out updates immediately that risk upsetting this until we’ve solved this last remaining issue.

On the plus side, it’s lead to some significant memory optimizations to try and minimize the issue, but at the same time the memory bloat is happening on a subset of systems deep in the openGL dll outside the debugging eyes of the dev team, so it’s been a tricky one.

We’ve not been idle in other areas. A ton of bugs have been fixed, and if sorting this last problem out does end up dragging on much longer, we will put out another release with bug fixes from our frozen code after we’re satisfied it’s stable. We’d rather have this issue sorted first though, but just so you know if it drags on we won’t let it lose us momentum.

So we’re not leaving you totally without anything beyond ‘just trying to get it done’, here is a stress test of the streaming system (an old version of the map) to determine how fast vehicles could feasibly go.

Which hopefully shows how prepared we are to add vehicles into the game when the time comes. Not until after RC3 though, but this gets us excited!

There are some other things we’re dying to share, but want to hold off a little more before we do that until they are ready. Let’s just say that there is a lot to be excited about in the next month or two for us and Zomboid fans alike.

News & Dev | 20 May 2013
Project Zomboid | Copyright © The Indie Stone 2023. All Rights Reserved.
Site by Redwire
Stable Build: 41.78.16 | IWBUMS Beta: 41.78.16 | Version history | Wiki
Follow us
Manage Cookie Consent
To provide the best experience, we use technologies like cookies to store and/or access device information. Consenting to these technologies will allow us to process data such as browsing behaviour or unique IDs on this site. Not consenting or withdrawing consent, may adversely affect certain features and functions.
Manage options Manage services Manage vendors Read more about these purposes
View preferences
{title} {title} {title}