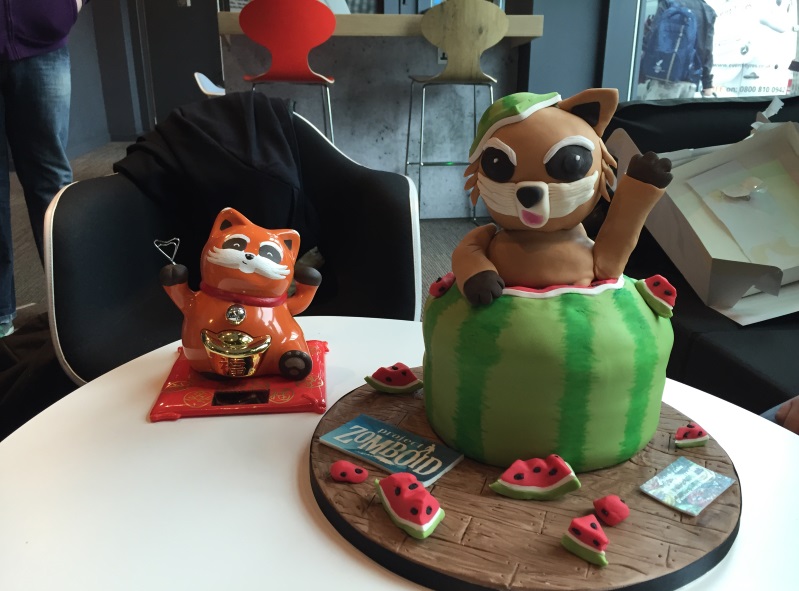 For the past four days the Project Zomboid team have been spreading our infection at the EGX games show in Birmingham. It was pretty staggering, really. Talking to so many passionate PZ players and (hopefully) introducing a bunch more to the Survivor pool was an amazing experience.

Right now the almost the entire PZ team and a bunch of amazing Community friends are travelling back to Canada, France, Germany, Holland, Scotland, Wales and (yes) Newcastle – so this is a lighter Mondoid than we’d usually like, but in case a photo of a Spiffo-shaped cake isn’t quite enough for you (thanks Tooks!) we’ll do our best with it.

On the final day we got a version of Build 33 running on the stand containing Will and Turbo’s work so we could show it to existing players who passed by and get some fellow dev feedback – it went really well but also spotlit some areas in which the new features could be tied into the game a little more smoothly. We brainstormed some simple ways to make the radio system feel a bit more real when tuning into new radio stations, for example, which would have it feel more like turning an analogue dial.

We also came up with a way to adjust the delivery of Turbo’s furniture movement system so it feels like less of a ‘side salad’ to the way the existing game works. This all notwithstanding, the plan is to put the build containing these features into internal testing upon Turbo’s return to Holland – so that the fundamentals of the systems can be checked out while Turbo makes any necessary adjustments.

Finally, having watched several thousand players (a fair proportion of them console kids) going through the PZ tutorial we’ve got a list of tutorial tweaks to make that’s a mile long. There’s only so many times you can witness someone pressing the individual ‘R’, ‘M’ and ‘B’ keys when they’re requested to tap ‘RMB’ before you realise you have to take action.

Oh, and in case you were one of the people in the comments who wanted a Spiffo t-shirt or art prints: they sold okay, but there’s still a bunch left. We’ll have a chat with the people who helped us with them over at Gamer’s Edition and work out the best thing to do with them, as well as hold a few community competitions I’m sure.

It’s great to come back to our Steam accounts to see awesome activity in our Steam Workshop tabs. As flagged in last week’s Mondoid RingoD updated and uploaded the TIS-curated Community Map Bedford Falls just before we all left for Birmingham – but it’s now been joined by a tribute to a familiar prison and ever more subscriptions and downloads to the Phoenix ‘Desperate Measures’ map.

To make up for this somewhat lightweight ‘tired and travelling’ Mondoid, we’ll also be running a new ‘Mod Spotlight’ blog later this week to highlight some of the coolest and most popular mods on the Workshop and forums – starting with a chat with Hydromancer, the person behind Hydrocraft, who kindly agreed to answer a few of our questions.

Amidst our thanks to Nasko, RJ, Thuztor, Tooks, Rhys, Connall, Turbo, Onto, Twiggy, RingoD and Kirrus for their amazing dedication, it would be remiss of us not to flag your attention towards some of the other AMAZING and passionate dev teams we’ve been surrounded by for the past few days. As such, we can assure you that a quick browse of any of the following would be more than worth your while: Theo and Lizzy, Super Mixtape, Fire Fu, Just Shapes and Beats, The Masterplan, Iron Fish and Riot: Civil Unrest. Oh, and playing on Valve’s HTC Vive is like looking into the face of frickin’ God.

That’s all for this week until the Mod Spotlight blog. If you’re one of the people we met on the show floor and said you either already own the game or were considering joining in the fun – then it was lovely to meet you. And we’re sorry for the faint smell of sweat and coffee breath.

The Centralised Block of Italicised text would also like to direct your attention to the PZ Wiki should you feel like editing or amending something, and the PZ Mailing List that can send blogs like this and patch notes direct to your mailbox.