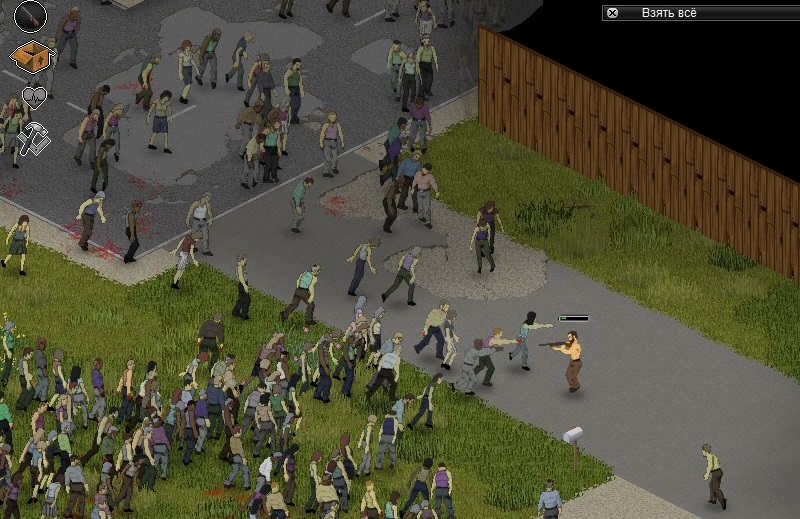 For 80% of Project Zomboid’s development and moderation team this week has been about sniffling, sneezing and waking up three times a night on a damp pillow. Seemingly, an unknown patient zero wandered the halls of EGX and infected us all with something contagious. It’s all good research, perhaps, but it hasn’t been pleasant. That all said, the Mondoid must go on!

A few items of note first. Twiggy is planning some midweek streams of Build 33’s Radio/TV systems, so be sure to follow his and our Twitter feeds. We’re thinking Tuesday night Brit-time currently, but that may well be pushed back to Wednesday depending on Turbo code tweaks.

Secondly, if you haven’t seen it already we ran a really interesting blog on Hydromancerx the main man behind the awesome Hydrocraft mod last week that can be found here.

A primary part of Build 33 is in trying to up the ante in terms of immersion, and during a discussion about how to improve our helicopter/zombie moments the topic of some early foundation work we did in integrating an awesome piece of audio middleware emerged. Build 33 just felt right for its inclusion, and as such right now RJ is connecting sound-wires backstage for the inclusion of FMOD.

For reference here’s our initial demo video from way back when. This shows reverberation, echo and occlusion. In-game sounds here use actual an approximation of the world: so the size of room, walls and any buildings between the player and the origin of the sound effect are all taken into account. There’s also directional sound on 2.0 speakers, but this will *hopefully* be better on release as we’d like to use an awesome plugin called AstoundSound. That said, right now we need to look into licensing stuff so we can’t confirm it right now.

To follow, here’s a previously unseen video – albeit one with everything ramped up to eleven on the sound-o-meter. It all needs refinement and balancing [particularly with zed noises and ambient music tracks] which is all stuff that’s on RJ’s plate right now.

You should be able to hear, however, cool ambient sounds – every bird is a single bird from a specific place, refrigerators hum, blinds flap in the wind and doors creak. Then there’s the aforementioned helicopter. It’s not just a sound file now, but an actual unseen object that moves around the map via AI. It will always be somewhere, heading off the playable map or perhaps doing passes over certain areas – and could also be tied into scripted events that are heard in reports over the new radio system.

The helicopter will also have sound blending to make it sound natural as it moves away from you, and we can use the same tricks to make shotguns sound like they’re the correct distance away from when it comes to meta-noises and MP. Instead of a permanent headache, helicopters can now be a real blessing as they’ll drag zombies along with them as they depart – seeing as they are now solid objects in the world making sound the zombies can follow accurately.

Also contained within the above are some new layered ambiance tracks from our music maestro Zach Beever. These will be reactive to the gameplay you’re experiencing (we’re taking some inspiration from Alien Isolation here) and will let us play more poignant music at more appropriate moments. That said, this may not appear in Build 33 as we will need more variation in the first version, and likewise in this video there are some experiments with zombie sounds that are included for the sake of pushing FMOD to see how far it’ll go – these, again, probably won’t be in Build 33.

To finish, let’s go over to RJ ‘Romain’ Dron to hear how his own work is going on Build 33 – on FMOD and beyond.

So how did the renewed interest in FMOD-integration come about?

Well, a lot of Build 33 is about building immersion, so sounds are a key part of that. We can now, for example, drag the helicopter around wherever we want to. So you’ll hear it come from east, and then slowly move overhead to the west! It’ll also be clear if the chopper has spotted you and is trying to follow you (for whatever reason) while it’ll also be possible for you to stick in the forest or inside buildings as it passes overhead. Be careful about showing yourself too fast though!

So what kinds of stuff do you think this will open up for us?

Well music is a big thing too! FMOD allows us to do all sorts of things with sound – bending volumes, merging tracks… so now we’ll be able to control how the music works while you play. If you get into a tense situation, the music will slowly change to match it.  In terms of more general sound effects though, we can add dynamic reverb, muffle the sound of outside gunshots if you’re inside a building… all those kinds of cool stuff.

How have all your other experiments in getting the PZ world to feel more ‘lived in’ gone so far?

Pretty good! The randomization of buildings makes every playthrough more tense and unique. You set out to your favourite safehouse like you always do – but what if it’s on fire? What if it’s already been looted? What if the previous occupants left the TV on a high volume, and you find a crowd of zombies in the front room staring at a news channel?  Then what about looting someone’s belongings and finding medical books and gear, and wondering whether the dead body downstairs clutching a pistol used to be a doctor or a nurse – or maybe it was the zombie in the bathroom?

Can you also give us a quick recap on how the botany trait is going to work? What sorts of plants will feature?

Basically, when you forage then players with the botanist trait will be able to find medicinal plants. So they’ll be able to turn them into a poultice to put on wounds or infections, or maybe just eat them on the spot. They’re clearly not going to be as strong as the medicines you can loot, but they can be really useful in terms of to helping you with stomach pain or to help recover faster from fractures and bleeding. And so, behold!

Comfrey, Plantain [not the banana sort] and Mallow! Yay!

Today’s featured image is (again) from the excellent screenshot-taking fingers of NikNik64Rus. The Centralised Block of Italicised text would also like to direct your attention to the PZ Wiki should you feel like editing or amending something, and the PZ Mailing List that can send blogs like this and patch notes direct to your mailbox.

Oh, and finally if you’re a floating voter or know anyone else who might like the game we’re currently on sale over on the Humble Store. It’s twenty percent off the game, alongside a whole bunch of other cool zombie games, if you’re interested.