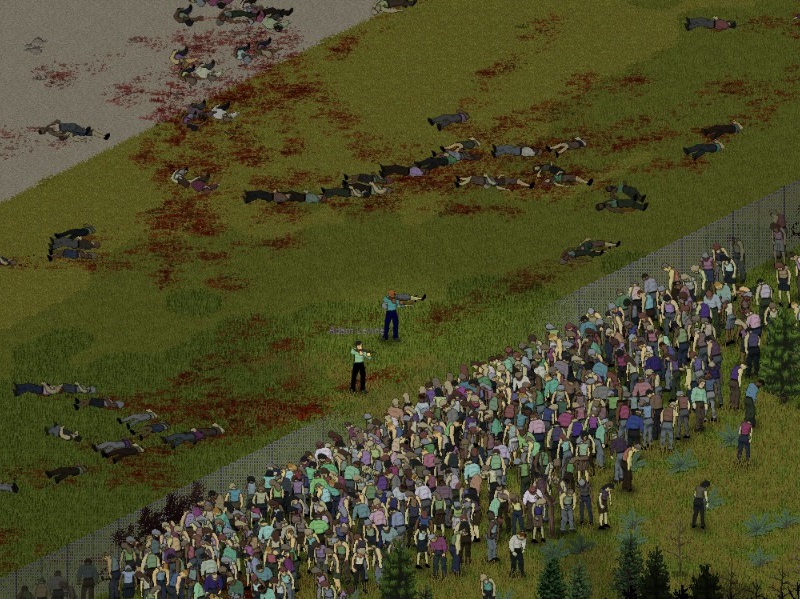 So where are we with 33? We’re basically at the point where all the systems are in and operational (and fun!) within our separate development branches – and are now having various additions and tweaks made to them from fellow dev feedback. Creative Mode needed better ways to revert construction, for example, while Turbo’s furniture movement system needs some love to make it more realistic, reduce menu clutter and make sure it’s more in-keeping with the game.

After some studious examination, and then elimination, of the bugs thrown up by Twiggy’s mid-week stream of Radio/TV then that end of the bargain is pretty much good to go – headphones have been added at the request of viewers, radio text judders when the player walks diagonally (henceforth known as ‘Twiggers’) have been reduced, more explanatory device names and brands have been introduced and commercials now play in more of the dead air.

Meanwhile RJ continues to tie sounds together backstage in FMOD (as discussed last week) and at this very moment is making sure that the sound of thunder is relative to the player – so it could either sound like it’s in the far distance or right overhead, giving you a true feeling of a storm passing over your safehouse. [The new thunder combined with some new music that’s been supplied by Zach Beever is pretty magnificent, even if we do say so ourselves!]

What will come after all this is crossing the streams. We need to merging everyone’s code branches together into a glorious whole – make sure they play nice together and do a bunch of testing. As such, even though the stars are starting to align, we’re not standing on the edge of an IWBUMS release just yet. To ease that pain, then, we thought it might be nice to make a habit of the following.

Twiggy has kindly agreed to stream current PZ dev builds after Mondoid publication [hopefully every week, but some contents may settle transit etc] and as such he’ll again be streaming Turbo’s Build 33 Radio/TV content today at around 1700 UK time for a few hours. So check out his Twitch stream here, and if you’re late to the party what with family, work and timezone commitments then you can watch the archived version should you wish.

This comes with the added benefit of getting some great feedback from his viewers, some of which can go directly into the game (eg. the aforementioned headphones) during this stage of development. The narrative content also really seemed to go down well with everyone during the midweek stream, which was really great to see.

We’re not going to compromise on difficulty when it comes to Survival mode, but since the advent of Build 32 have seen a fair few posts asking for less of a raw deal when it comes to the zombie apocalypse. If players find Survival too difficult and First Bite too easy, then aside from burying yourself in fiddly Sandbox options there’s no direct way into a halfway house with a difficulty level that’s on a par with Survival prior to the introduction of the current Zombie Population System.

As such, Build 33 will come with the new process in terms of starting a New Game – that will also open up different stages of the PZ narrative timeline for us to build on as future features are slotted in.

First you’ll pick a Scenario that governs the game world and its zombies. ‘Initial Infection’ will take place the day before the current game starts (and will have extra radio/TV content to match) and will have First Bite style zombies with limited perception and strength due to their recent turn. [This will, however, be considered non-canon as it doesn’t fit with the traditional zombie remit that TIS earnestly believes in.] Then ‘The First Week’ will pretty much be the setting the game begins with now, while ‘Eight Months Later’ puts you directly into an increasingly overgrown world full of rotten food and a distinct lack of electricity.

Secondly, you’ll get to pick the Starting Conditions of your own character – Easy, Normal and Hard style options that will help you find your correct (dis)comfort level quickly and easily without diving straight into the Sandbox Options. This will cover stuff like XP gain, any loot you start with and stats that are attributable to your own character rather than the harsh apocalypse you’re about to stride into.

The toughest experience, however, our ‘Survival’ take on an Iron Man mode, however, will remain as is – entirely sacrosanct, along the existing timeline and playable as a ‘Hardcore’ mode only.

It’s a much debated topic, but we’re convinced that this is a great way to cater for those left out in the cold by Survival’s current difficulty level without getting the nerf-shears out. On top of this it will provide a neat framework for the PZ timeline in terms of hanging future narrative content around it – which will start with Build 33’s radio system, distress beacons and a few secret late-game easter eggs.

On to more community-sided endeavours now, and we’re really pleased to report that Xeonyx has put his amazing New Denver map on the Steam Workshop. For more information on it and the story behind its creation then check out our chat with the man behind it here.

In the meantime if you’re a mapper like Mister Xeonyx then our very own RingoD has just published some guides on how to upload your map onto the Steam Workshop, and how to update your current map to include the more recent builds’ foraging and zombie respawn systems.

So, we went and had a chat with a nice man called Jon who works at Gamers Edition who told us that although we actually managed to sell some t-shirts and art prints at EGX – there are still some left. And yes – they’d sell them on to you fine people off their website. Huzzah! So, details and whatnot will be forthcoming once they’ve nailed down the finer points of pricing, postage costs and other logistical fun.

Today’s featured image from the fine screenshot-taking fingers of TheLeonBM over on Steam. The Centralised Block of Italicised text would also like to direct your attention to the PZ Wiki should you feel like editing or amending something, and the PZ Mailing List that can send blogs like this and patch notes direct to your mailbox.