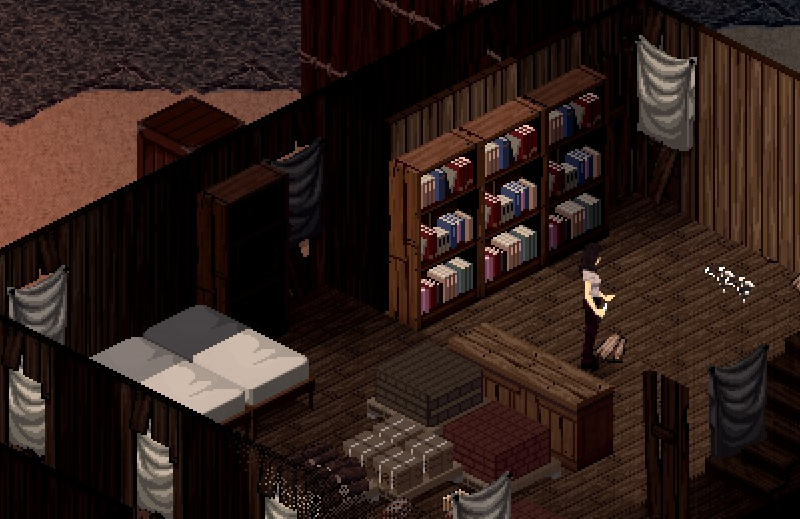 It’s a busy, busy week at TIS Towers this week as the vast majority of the dev workforce and a considerable chunk of community will be heading to Birmingham (UK version) later this week to attend the EGX games show and to shove Zomboid into the faces of the assembled masses. If you fancy coming along then there are still tickets available.

In the meantime, for this Mondoid, we’ve caught up with two devs – one of whom is hammering away on the ever-more complete-looking edifice of Build 33, and another who we haven’t heard from for a while. There was also quite a big bug/tweak update to Build 32 back on Thursday from the consistently wonderful EasyPickins, the full skinny on which can be found here.

“Hello! So, this morning I’ll be doing a few small tweaks and fixes to my Radio and TV system, and then getting my branch merged with all the other 33 stuff hopefully without getting bitten/scratched in the process.

There’s been a lot to tidy up on the radio system – UI stuff, MP functionality, the WordZed utility and a good load of smaller stuff that needed polishing.

A major hurdle that’s been overcome is in ensuring player to player radio communication is working coherently. I’ve been doing some testing helped by Twiggy and Tooks, the results of which can be seen here – please read on for the explanation though!

In this video all the radios are set at the same frequency of 500mhz, and both myself and Tooks are invisible to the zombies – which is why they can be seen getting attracted to the voices coming out of the radio sets rather than our tasty bodies. The biggest complication with P2P radios and walkie talkies is working out exactly what is player conversation in the direct vicinity is picked up, what is transmitted and what is received – and how it’s seen on-screen. As such I’ve developed a set of rules to govern it all cleanly.

At first you can see me not wearing a radio device. I’m standing in-between Tooks and the HAM radio, and not in range of any microphone at all. It’s when I move closer to Tooks, who is using a walkie talkie the entire time, that my second line is picked up by his device and transmitted to the HAM radio. After this my character equips a radio as well, and I transmit some lines – first standing away from Tooks and then closer to him. Seeing as we both have walkie talkies equipped and on the same frequency, based on a few rules, the radio system then picks the best suited device to actually transmit it. It’s all about avoiding duplicates on the airwaves.

Now this is in the can there’s not that much more to add – next step is internal testing and further fixes/changes from feedback. That said, I also still have to put in recording onto tapes, broadcasting from said tapes and a system that lets modders make use of the radio stuff easily. None of that is vital to the internal test though.”

“Hello! I’m currently taking a small break from working on the North East section of the official map to update Bedford Falls, the first community map that I created that contains hundreds of new buildings, most of them made by members of our forums. For the uninitiated, you can check out what Bedford Falls looks like through an overlay on Blindcoder’s superb map project.

Now that we have Steam Workshop integrated it felt like a good time to get it spruced up and up into an easily downloadable mod on Steam that players can subscribe to and get fed updates whenever they arrive. One of the major things that the map was lacking was the relevant info to help handle the updated zombie distribution system, now I’ve integrated it I’m thinking that it should help up the ante in and around Bedford Falls. Expect lots more zombies in bathrooms!

The other major thing that this update will add is the foraging, no more will you have to head miles West or North from Bedford Falls before you can start foraging for those all-important berries and twigs. I’m hoping that this will make Bedford Falls a much more viable location for your post-apocalyptic hide outs.

Once I’m finished with this process I will be creating a thread on the Zomboid forums which documents exactly how to update an older map to work with all the current build’s features, how to package it as a mod and how to upload your mod to the Steam Workshop for others to subscribe to and download.

I would also say that now is a very good time for building makers to upload their solo buildings onto the Workshop – as when Creative Mode hits in Build 33 then this should see them being used by map makers and Creative Mode servers much, much more. This will in turn allow those maps and servers to grow exponentially. Once back from EGX I will be going through the list of buildings Bedford Falls contains and working with the community to provide a much larger library of buildings for us all to use in Creative Mode, leading to more map mods and unique servers. Exciting times!”

Hokay then, we’re off to EGX – where we’re planning all kinds of development meetings [it’ll be the first time we meet Turbo in the flesh for example!] alongside the fun of meeting gamers on the show floor and attempting to infect them with Zomboid. It’ll also be the site of our first grand ‘merchandise experiment’, so if we never sell t-shirts or art prints ever again then you’ll have the disinterested people of Birmingham to blame.

The t-shirts currently look like this by the way. Cool, non?

Anyway if you’re coming along then please, please don’t be shy – as we’d love to have a chat and maybe a drink too after the show floor clears. See you there, or here again next week!

Today’s featured image from the EXTREMELY mysteriously named ‘█|’ on Steam . The Centralised Block of Italicised text would also like to direct your attention to the PZ Wiki should you feel like editing or amending something, and the PZ Mailing List that can send blogs like this and patch notes direct to your mailbox.

And Workshop for all…