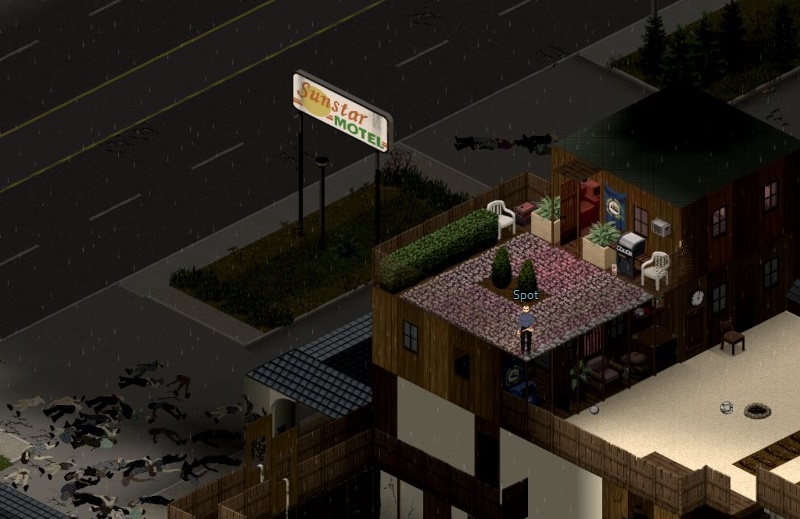 Hi there survivors. Work continues on the animation, combat, blood, gore and clothing systems that will in turn unlock the implementation of our final primary game features. We’ve had new textures going into the system (different clothing, like long-sleeved shirts) but most of the work has been under the hood, so this week’s Mondoid isn’t quite the blow-out that the last one was.

That said, we’re expecting an internal test build of nu-nutrition, metalwork and sleep systems fairly soon, which will then be released to the community in an IWBUMS for testing and balance feedback. (Please note that, at the time of writing, this hasn’t been merged with the animation system though, which still requires tinkering.

As such let’s turn to what RJ and Turbo are up to, which is primarily in turning a spotlight onto longstanding features to bring some added spice to survival.

In RJ’s case we wanted to get back to the feeling that falling asleep in the zombie apocalypse is a dangerous thing to do, just as it was back in the earliest builds of PZ. As such this week RJ has been coding in a reduced player control on when you’re actually able to sleep (so if you’re anxious or in pain you might require sleeping pills) and also removing control from what time you actually wake up in SP and local co-op.

RJ has also been inside the Sadistic AI Director so that he can better govern zombie movement and intrusions while you’re sleeping. “Basically, if you’re going to sleep in the next build then you need to be extra-sure that the TV is off, the curtains are closed and the lights are off.” he explained, when he received his weekly Mondoid prod. “We’re looking into zombie behaviour a bit, and buildings with zombies outside and have light showing or sounds audible could attract attention. These events will be rare, but enough to keep you on edge – just as anxious characters might wake in the middle of the night now.”

“My next job will be to remove the choice of how much time you want to sleep, and adding a working alarm clock system for you, and maybe your nearby co-sleepers. You might want to be careful to turn the alarm off if you waking up early and go off scavenging with your clock in your backpack though!”

In terms of general tweaks from community suggestions and improvements it’s also worth noting that in the next build RJ has also coded in some nerfs to the Lucky trait (abundant Spiffo plushies will be no more L ), some extra and more easily identifiable skill books where they were previously lacking, a bunch of new items relevant to metalwork, more world-filler to flesh out your shelf space and the ability to turn off helicopter/gunshot meta-game events in your sandbox options.

While he waits for more community radio/TV translation work to roll in (Russian is in the works!) Turbo is currently working on ways to tie the system closer to gameplay through their impact on the boredom moodle, and then the boredom moodle’s impact on the player. As we’ve mentioned before, we also need to finish off the work that sees XP/recipes learned from certain shows.

He’s also working on improving the visual/audio aspect of this system to make it feel like a bigger part of the game world. As a test-bed for this, here’s a rough and ready (and very WIP!) vid of a community suggestion that came up when thinking of ways to make the game feel a bit more 90s.

Finally, a public service announcement. Blindcoder’s amazing PZ map project has a new home at http://map.projectzomboid.com/, so it’s all nice and official – albeit still under the strict custodianship of Mister Blindcoder. There’s still work to be done on the 2x overlays for some of the community maps, but BC is happy to throw the doors open to the general public, and asks for any issues to be reported on the PZ forums. As ever, our eternal thanks go out to Benjamin and his amazing work on this.

This week’s featured image by Spot on your Steam service over there. The Centralized Block of Italicised Text would like to direct your attention to the PZ Wiki should you feel like editing or amending something, and the PZ Mailing List that can send blogs like this and patch notes direct to your mailbox. We also live on Twitter right here! Okay thanks bye!

You got red on you