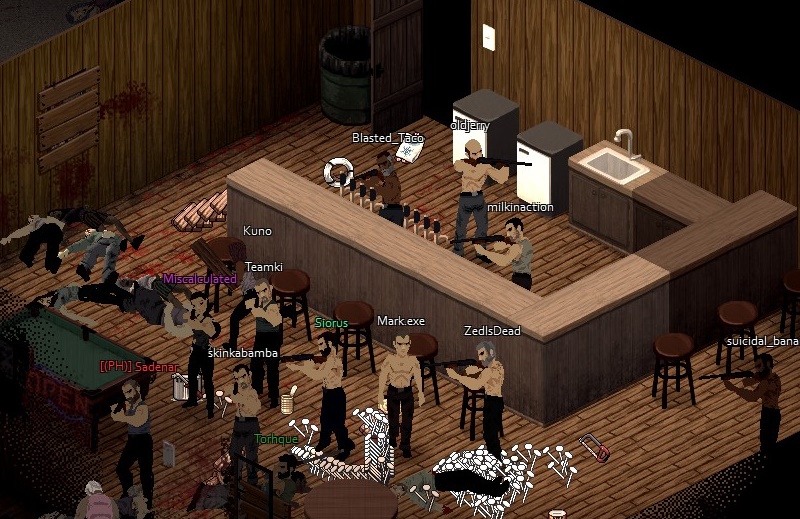 Hey all, Mondoid again. Work on the anims/combat build continues, and we’re still tying the new system into Zomboid’s multiplayer contingent. The new state machine stuff is quite a major shift in the game code, and MP is used to dealing with the old version so the dev wheel’s still (still) turning on that front. Elsewhere meanwhile…

So last Thursday we had 172 lovely members of the community jumping on the current Build 35 test version together, and it was great: directional VOIP governed by player position on the map clearly brings a ton to MP – so hurrah!

To see if lightning can strike twice within our awesome survivor-base we will be having The Great Big Build 35 MP Megatest: Part II this week, again on Thursday evening (GMT). This will be an updated version of the game (released fairly imminently – details below) and focus more on Factions and new Admin features that were a little too bugged to get proper feedback on last week.

Thankfully people seemed to have plenty of fun, but as a stress test our community playdate did its job by flushing out plenty of bugs for us and our friends at General Arcade to stamp out. We had a few crashes during the run of play, some heavy lag on the (rare, but important) times when there are 15+ players in the same area, a few issues with some Bluetooth headsets and a few bits/bobs of levels balance. Oh, and Rosewood Prison was mysteriously zombie-free.

Nothing sinister though, so hopefully we can iron out these last creases before finally releasing what we currently have in the public IWBUMS beta test to the public. If you want to check out some footage from the Megatest than .exe’s stream can still be found here.

The current Build 35 IWBUMS beta is content locked, so this feature may well be left aside until a follow-on build unless Turbo can sweet-talk us into thinking otherwise, but Turbs has now finished off his movable item system so it’s extended to multi-sprite objects. It’s something our base-build fanatics have been asking for, so here’s a quick vid to show it off.

You can now manoeuvre bigger furniture around, and also (with the correct tools) deconstruct larger objects into several smaller kits that will be able to fit inside your inventory – but will clearly be fairly heavy too. Many two tile items, like signs and paintings, will just fit into your inventory however. Turbo has also updated the movable item icons so they look like the actual object in question, rather than one for a generic category, and generally made the UI a nicer place to be as well. The ‘kit’ sprite will also get a Mash revamp too, as the ‘little box’ look could be improved.

That’s about it for this week, although as mentioned above we do have a new 35.23 beta build dropping tonight or tomorrow that will appear here. This contains some important longstanding fixes for modders, new farmsteads and farmland between Rosewood and March Ridge, the ability to choose different colours when painting containers (handy for colour-coding in MP safehouses), extra Faction and Admin teleport options, a ‘support ticketing’ system to let players to get in touch with server admins and expanded foraging/trapping zones.

This will, most likely, be the build that Thursday’s Megatest: II will run on. If you have any problems updating then please check out this thread, which outlines the VCRedist 2015 issue that some players are running into. Thanks everyone!

This week’s featured image from Gassy Taco over on Steam, who we assume is Blasted Taco of the TIS forum’s cousin or something.  The Centralized Block of Italicised Text would like to direct your attention to the PZ Wiki should you feel like editing or amending something, and the PZ Mailing List that can send blogs like this and patch notes direct to your mailbox. We also live on Twitter right here! Our Discord is now open for chat and hijinks too. A general overview of the content of PZ builds past, in testing and upcoming can now be found here.