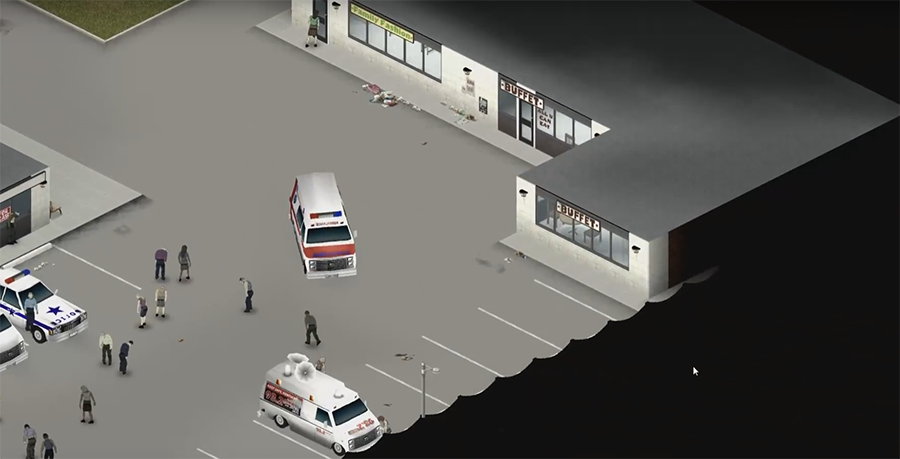 Hey everyone! Welcome to Mondoid. This week, and we’ll cut straight to the chase with some video goodness! (Remember: work in progress, some bugs visible! More work in implementation and visuals to come!)

So, what are we looking at? Physics-enhanced vehicles in Project Zomboid, both online and off, and some hefty improvements on map streaming and object processing to handle it all. You enter a car with ‘E’, control with WSAD and have various vehicley-options open to you through a radial menu when you’re in the driver’s seat.

We’ve had the vehicles branch on the boil for a while (alongside the usual anims branch, standard build branches and a few others) but this year’s work in melding of EP’s car physics and framework with General Arcade’s special sauce has seen great things occurring. Progress has been good this past week too (as you can hopefully tell from comparing this video with one recorded five or six days ago) and we’re really excited about how the vehicles look and feel to drive. There have already been tests in multiplayer that went very well, with the new map streaming changes working niftily and boding well for future optimization.

So what’s still to be done amidst the general bug fixing? Well, in amongst others and the tidying up of zombie collision visuals – the following:

This week’s image is by us. The Centralized Block of Italicised Text would like to direct your attention to the PZ Wiki should you feel like editing or amending something, and the PZ Mailing List that can send blogs like this and patch notes direct to your mailbox. We also live on Twitter right here! Our Discord is now open for chat and hijinks too. A general overview of the content of PZ builds past, in testing and upcoming can be found here.