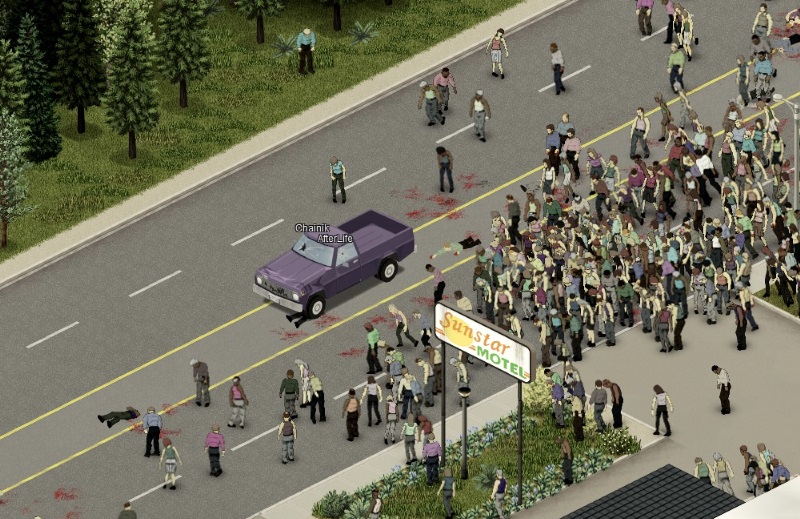 Hey all, here’s a quick round-up of all the work that’s gone into the internal dev branch of PZ this week.

First off, we’ve had some significant improvements and fixes made by Bitbaboon Mark to the core animation blending system. He’s fixing a whole bunch of issues, snaps and glitches that have been vexxing us for many, many weeks – digging deep into the code, and doing a total rewire where necessary.

In prior Thursday vids we cut around these uglinesses as much as possible, but they still reared their heads. Snaps between character animations, jarring moves when turning to certain compass directions while strafing, and various other ugly things that we just couldn’t account for were plaguing us – but have now finally been fixed, leading to a 100% smooth animation blending system.

Zac’s prepared a video demoing the new blending – although please note he’s running in debug, so this doesn’t represent gameplay. It’s only to show off the smoother animation blending.

Zac’s own work continues on the torn clothing system, allowing us much more visual indications of damage and clothing wear and tear (quite literally).

As well as putting a player’s newly scavenged/treasured Spiffo shirt at risk of damage, this will allow much more variety with zombies in particular. Romain has been adding code to implement this new system to further randomize zombie’s clothing conditions, and tie potential clothing damage into the various game systems for the player.

Here’s another Zac video demoing this new functionality, we’ll look to get a video of it in context of the game mechanics later on.

Beyond this in the world of TEA, Mark is now starting work on his much awaited rotational blending system – having secured the foundations with the work outlined above.

This will allow us features such as wheeling/turning for characters, allowing the player to turn on the spot (by stepping in a circle), or to turn realistically while walking/running just like people are used to in the big boy AAA games.

We will of course prioritize the feeling of control and immediacy that people are used to as much as possible, we don’t want the controls to feel sluggish, but we hope it will make the characters control and look much more like they are part of the world.

Speaking of, please note, that we’ve decided to put the high-res model rendering work on ice for a week or two, since there were still numerous issues with it that meant it wasn’t suitable to put into the main line – and also it kept getting further broken by the flurry of additions and changes from the team’s work described above.

We feel it would be best approached toward the end of Build 41 dev just before IWBUMS, at the point we could get extra resources on board to get it working right. As such all videos until then will use the traditional character resolution.

At the TIS end, meanwhile, other work this week includes the addition of new clothing items such as a poncho, hoodies, scarfs, aprons and swimming outfits. RJ also now has hair and beard styles being associated with zone costumes (for e.g. so you don’t tend to get military zombies or cops with hippy hairstyles and big beards).

Martin meanwhile has been busy with new anims and costumes, hawaiian shirts, several new combat animations, and has extended the logo decals to cover even more in-game stores and brands.

Next week Xeonyx will be starting work on main map polish (signage, roads, widened garages). A big priority for us in this is to provide adequate warning to drivers that sharp turns are ahead, particularly on the highways between towns. So where possible, he’s also going to explore smoothing out the corners with diagonals if they allow it – although sadly it’s not currently possible for any roads that have curbs or markings.

We are looking to merge in Yuri’s water tech into the main line tomorrow, and will be focusing on balancing colours and other aspects of the effects as per internal team and community feedback once we hit IWBUMS.

Given the amount of moving parts in this build already, we’re considering bumping revamped fire effects to build 42 as it still has significant work left to do, and as such Yuri will then be joining in on the efforts to bring build 41 to the IWBUMS stage. His primary missions will be in reducing general car sizes and also nixing the annoying way that cars can sometimes be lost after computer system crashes.

Finally, It is very important that this reddit post gets upvoted. Please do so if you can.

This week’s motel horde from AfterLife. A general list of stuff added to PZ, and vids of features being worked on, is kept here– so you don’t have to plough through endless dev blogs for info. The Centralized Block of Italicised Text would like to direct your attention to the PZ Wiki should you feel like editing or amending something, and the PZ Mailing List that can send blogs like this and patch notes direct to your mailbox. We also live on Twitter right here! Our Discord is open for chat and hijinks too.