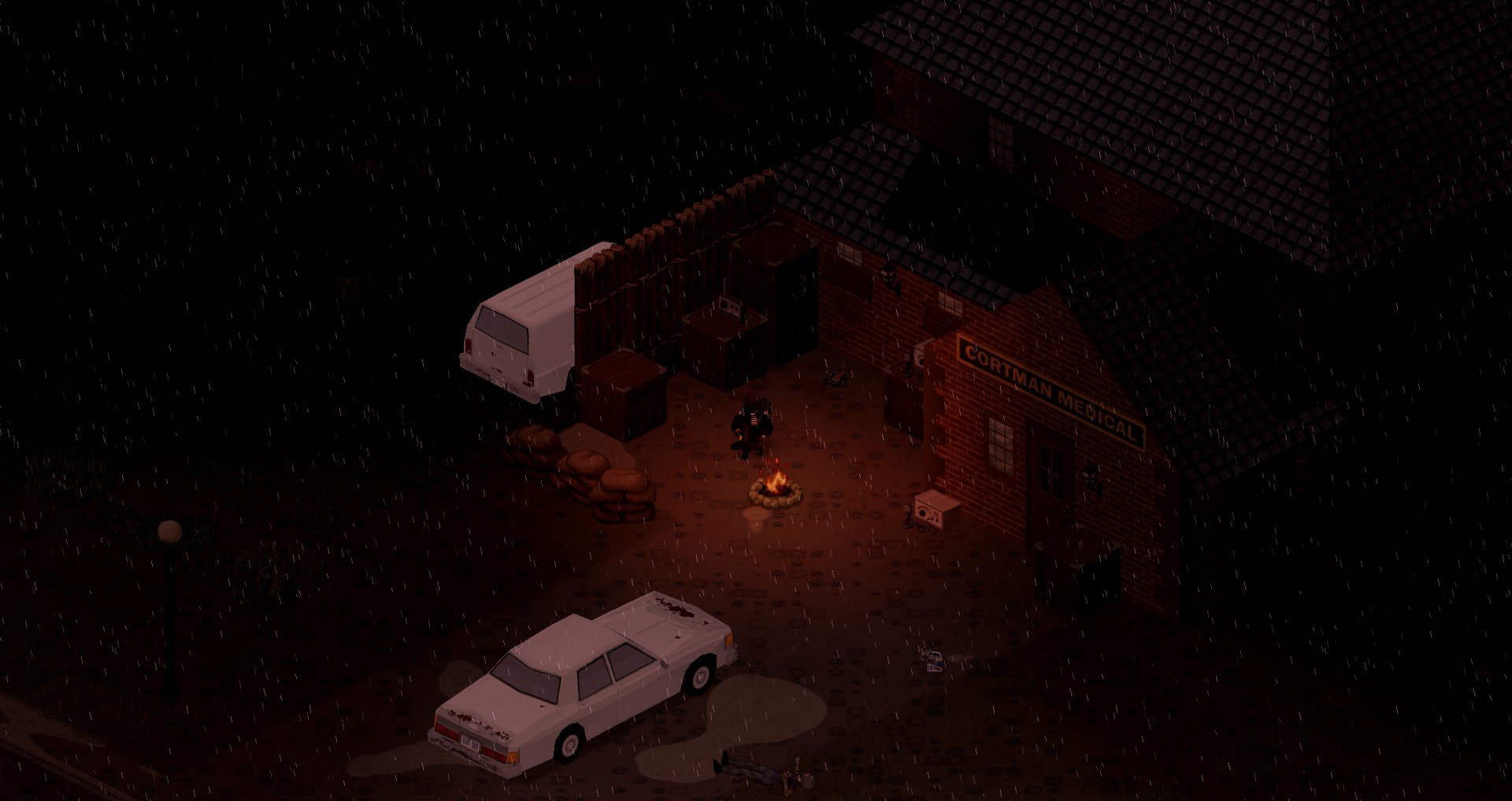 Hello all! Welcome to this week’s Thursdoid. News flash: I’ve just had to edit out the ‘Hurray! Build 41.40 has just been released into IWBUMS beta!’ portion of the Thursdoid, because a last minute issue with auto-shoves not protecting from scratches or bites was discovered. Obviously this would not go down too well, so will need repairing. Happy days! This will be fixed as soon as possible and we’ll get the build pushed hopefully today.

To make up for the lack of a build at time of posting, Binky has kindly donated a WIP map tease screenshot of our rendition of Louisville:

Work continues on fixing up the last remaining issues with zombie syncing. As stated before, the multiplayer has been in large part completely rebuilt from the ground up for syncing characters and zombies, to provide for much better performance and less issues with lag.

One big part in getting these last issues fixed has been in generating diagrams to help debug what is taking place over time between server and clients in order to make sure they both match close enough to provide a believable experience comparable to that of single player. Yuri has managed to sync up thumping and fence falling perfectly using the animation state transitions using this additional power. Though is still debugging a few edge cases where the system fails. (Look out for it in the video)

Lastly, just wanted to add a few candid words about the ongoing MP development – We know people are frustrated at the long wait, and are seeing more and more frustrated comments about MP’s absense from B41 as the weeks go by.

We’re sorry that it’s taking so long – however it is what it is, and is what it is for numerous reasons – not only the immense task of building a strong and capable multiplayer architecture, ripping out the old systems, creating multiplayer that will see the game succeed and help build up a larger multiplayer following on B41’s full release (something we’re not willing to compromise on, as B41 going live fully will be the most crucial opportunity for Zomboid to grow in popularity since the game’s initial release, and squandering that opportunity with flaky MP could have a hugely negative impact on PZ in the future), but also with only a limited number of the team able to undertake the work that needs to be done, along with the various additional challenges from fun and unavoidable lockdown/childcare related issues within the team that come from the ongoing COVID-19 situation. It’s definitely been a slog and will continue to be for a while.

As with many other dev teams, we’re not necessarily firing on every cylinder right now – but even if we were, this is and has always been a lot of work to undertake, something we’ve tried to stress again and again – and while it’s taking a lot of time in less than ideal circumstances, the results are extremely exciting, and progress is definitely picking up.

It’ll take however long it takes though – we’re never ones to give ETAs at the best of times, but as stated these are not the best of times, and all we can promise is we want it out there as much if not more than any of you, and will continue to work tirelessly on getting it out there to you all as soon as possible – and if you want a silver lining, if we went with our original plan you’d still be playing B40 while we worked on this. The whole reason we released B41 into IWBUMs as single player only was anticipating we’d be wading in MP guts for some time, though we didn’t know quite how long it would end up taking, so we’re thankful that people are getting to experience all the work we put into B41 now, along with improving B41 alongside the community while the MP work is underway – and finally we want to thank those who are showing patience and understanding about what we’re trying to accomplish here, and have shown support in the community. It helps keep us motivated a lot!

Once B41 is finally out there, we already got lots of real exciting stuff to show off for what’s coming next. We’ve long learnt from our mistakes of the past, and now only show stuff pertaining to the current build in development in the blog updates – but that doesn’t mean we don’t have plenty of extremely juicy stuff piling up behind the scenes we’re dying for people to see.

This week’s fireside shot from Rei Ayanami. A changelist of all IWBUMS patches since the 41 beta was released can be found here. A general list of stuff added to PZ, and vids of features being worked on, is kept here – so you don’t have to plough through endless dev blogs for info. The Centralized Block of Italicised Text would like to direct your attention to the PZ Wiki should you feel like editing or amending something, and the PZ Mailing List that can send you update notifications once builds get released. We also live on Twitter right here! Our Discord is open for chat and hijinks too!